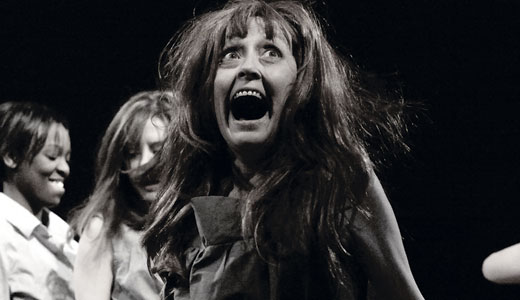 Women Behind Bars
A production by the Alley Theater at Art Sanctuary. Directed by Kathi E.B. Ellis. Continues through March 12 at 1205 E. Washington St. For tickets or more information, visit www.thealleytheater.org.

Inside the charmingly haphazard warehouse/gym/gallery space that is the Alley Theater’s home base stands a gray, lonely set, representing the New York Women’s House of Detention in Greenwich Village — a place where criminals become victims, souls are burned up, and bonds are made as quickly as they are destroyed. In the style of a black-and-white 1950s B-movie, this campy but complex production dramatizes a world that exists on the fringes of society and is easily ignored, even when it’s found in the middle of a big city.

Upbeat rock ’n’ roll crackles through the speakers while the audience is moseying in, snuggling down with their beer, popcorn and dates, and the show begins at least 15 minutes late. But just like any arrestee, we’re suddenly thrown right into the dank cell, where a failed jailbreak has just taken place. The sadistic matron (J.P. Lebangood) is ripping the female inmates a new one. We are introduced to the diverse assortment of prostitutes, drug dealers, thieves, arsonists and murderers, and once the matron returns to her lair with her ass-kissing sidekick (Jamie Lentz), we are let in on who these women really are, beyond the labels they’ve been reduced to.

The solid cast of nine women and one man illustrates a day in the life in the ladies’ big house. Fights break out and insults fly like knives, while the newest inmate, the terrified and innocent Mary (Dana Hope), is stripped down, shoved in and “initiated” like all the others. We are taken along on a painful seven-year sentence with her, and nothing is left out. Hope gives a moving performance as the tragic heroine and expertly portrays the painful transition her character makes.

Mary’s cellmates consist of a sweet elderly woman with a dirty mouth (Sandy Neuman), who sits in a rocking chair at the corner of the stage with her nose in a Bible, muttering the occasional verse; she’s a comforting presence throughout the performance. The tough girls, Gloria (April Singer) and JoJo (Wanda Butler), are two of the most heartbreaking characters, because it is clear their anger is a mask for a deep-seated despair and hopelessness, which Singer and Butler achingly evoke. Blanche (Tiffany Smith) and Cherie (Kristy Calman) offer some cute and necessary comic relief, though once you get to know them, you can plainly see their agony as well. Lynne McReynolds Chenault is delightful as a melodious junkie prostitute, and I couldn’t take my eyes off Laura Ellis, the wide-eyed, post-lobotomy arsonist who slinks around the stage striking matches and staring at the flames, making random but sad proclamations.

While the show is full of shocking and disturbing events, it is strangely comedic, which takes the edge off. If it were too realistic, it would be painful to watch. Eventually, I stopped finding the humorous moments funny, while a lot of audience members kept laughing. “Women Behind Bars” never lets you forget that it’s just a play, but it is a deep and intricate piece that is full of symbolism, opening itself to many interpretations.