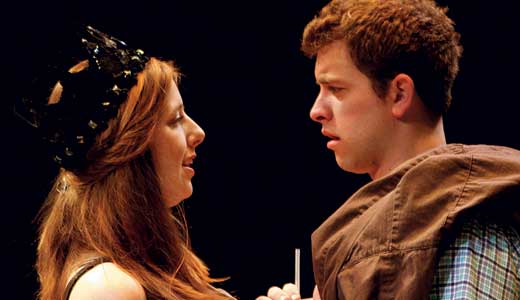 The End
A production by Actors Theatre, part of the Humana Festival of New American Plays. Directed by Amy Attaway and Michael Legg. Continues through April 3 at 316 W. Main St. For tickets or more info, call 584-1205 or visit www.actorstheatre.org.

With 2012 on the horizon, it just might be the end of the world as we know it. I feel fine, but perhaps I’m too optimistic. If we do see The End in our lifetimes, what will it be like? Could we really do anything about it apart from stocking up on zombie-killing supplies and awaiting our doom? The Humana Fest dives into that conversation this year, inviting playwrights Dan Dietz, Jennifer Haley, Allison Moore, A. Rey Pamatmat and Marco Ramirez, in collaboration with this season’s promising Intern/Apprentice Company, to take up this terrifying topic.

This young crew often gets stuck in the late-night time slot, but it’s actually a fitting time of day to see “The End.” Their single early morning showing should be interesting, since the show feels like something you’d find while channel-surfing at 3 a.m. The production consists of several short skits, each tackling a question or offering an interpretation of the apocalypse.

In Pamatmat’s piece, “This Is How It Ends,” we meet the Antichrist, who looks a little different than the traditional eschatology suggests. Emily Kunkel was phenomenal in the role, as was her unsuspecting roommate, Sean Michael Palmer. The piece then took a bizarre turn with the entrance of the Four Horsemen, whose stories served as interesting bookends for the production. While the ending was profound, it seemed a bit forced and dragged on a little too long.

What made the show really sparkle was Ramirez’s monologues, marvelously performed by Peter Vergari, Alex Stage and Kerri Alexander. In each piece, the actor commanded the room and relayed unsettling scientific information that suggested how the world could easily be obliterated. Each performance was enhanced by simple yet captivating visual aids. Ramirez’s longer piece, “La Muerte,” was beautifully eerie, with stellar performances by Alex Hernandez and Jordan Brodess that were accompanied by live musicians providing spooky bass and guitar swells.

As expected, there was a sketch about zombies. In this culture, at this time, it’s nearly impossible to ignore the zombie craze, and this skit gave it just the right amount of attention without being overdone. Though it was performed well, Haley’s sketch didn’t exactly stand out from the other zillions of zombie works out there.

“Apocalypse Apartments” illustrated another familiar situation — a few survivors are planning their next move in a smoldering city and wondering how alone they are. The characters are trapped in their apartments, antsy, terrified and bickering. Again, the performance was adequate, but the piece unmemorable.

Dan Dietz’s show-stealing “Promageddon,” in which the apocalypse fell ever so conveniently on prom night, was set in a high school basement. Brodess returned as an adorably tragic emo dude with sweet dance moves, Ellen Haun was hysterical as the wannabe prom queen, and Havalah Grace was outstanding as the nerdy oracle. “Promageddon” definitely got the most laughs — and might have served as a better ending.

Though “The End” was not exactly awe inspiring, it was an enjoyable experience propelled by a team bubbling with talent.