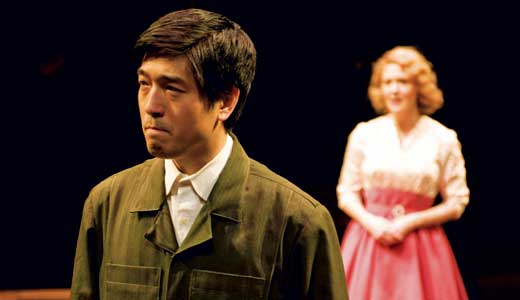 Maple & Vine
A production by Actors Theatre, part of the Humana Festival of New American Plays. Directed by Anne Kauffman. Continues through April 3 at 316 W. Main St. For tickets or more info, call 584-1205 or visit www.actorstheatre.org.

We live in an age where we can listen to a Gershwin Pandora station while reading “The Omnivore’s Dilemma” on a Kindle, and eat Thai food out of a box while Skyping with our mom and sending pictures of cats to one another’s phones. The American Dream is on steroids and has had copious amounts of plastic surgery. How much is too much? Jordan Harrison’s hilarious, captivating script, “Maple & Vine,” takes us on a trip to a simpler, more orderly America we might have thought was long gone and beyond recall.

Katha (Kate Turnbull) and Ryu (Peter Kim) have it all — he’s a plastic surgeon, she’s a publisher, and they have a swank apartment in New York City. They’re not happy. They love each other, certainly, but something is missing. They’re willing to try anything to escape sleepless nights and dull, exhausting work when the charming, clean-cut Dean (Paul Niebanck) invites them to join the Society of Dynamic Obsolescence (SDO) — where it is perpetually the year 1955 and authenticity is key. They agree to a six-month trial run to see if it makes them feel any better. What they discover is the art of sacrifice and repression, and how trading certain rules and boundaries for others might be liberating.

The play was born from a project initiated by director Anne Kauffman, where interviews were conducted with people who live outside of the modern world — nuns, Amish and even Civil War re-enactors — and how cutting down on the unlimited options, the wealth and the freedom can provide a more gratifying way to live. Harrison then melted this information down into one tangible, familiar and relevant setting — the 1950s. What results is an entertaining but slightly unsettling piece that has a few unexpected surprises. After our first cocktail party in the SDO, we begin to wonder, “Is living here going to be a good idea or not?”

The strong cast expertly captures the opposing worlds, what happens when they collide, and clearly evokes the transition each character makes. Turnbull is a familiarly stressed-out, independent modern woman who can’t seem to pull herself out of a six-month-long funk, while Kim is a suitable mate with worries of his own. Together they are a believable married couple, hopeful but less than perfect, who switch roles as they are faced with discrimination and a new set of challenges.

Niebanck looked and sounded like he stepped out of an old television set — impeccably portraying the all-American ’50s man whose secrets are cleverly veiled but inevitably surface. Playing his wife, Ellen, Jeanine Serralles elegantly but firmly takes hold of a room, standing tall and insisting that a homemaker is not oppressed, but in fact quite powerful — an illusion that disguises her own insecurities left over from her former modern self. Even when a trap door malfunctioned, Serralles’ response to it generated applause. Finally, Jesse Pennington is solid and captivating as a character who reminds us that certain truths just can’t be erased.

With refined set pieces that capture so much of a world in sometimes very few items, this production is an absolute delight that might either make you feel guilty for texting during intermission, or rejoice because you’re not automatically expected to be a Susie Homemaker. ’Tis a gift to be simple … or is it?