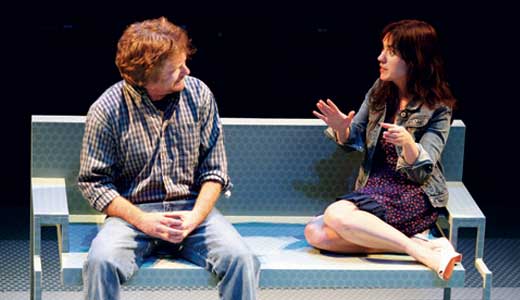 A Devil at Noon
A production by Actors Theatre of Louisville, part of the Humana Festival of New American Plays. Directed by Steve Cosson. Continues through April 3 at 316 W. Main St. For tickets or more info, call 584-1205 or visit www.actorstheatre.org.

“A Devil at Noon” is a lot like “Lost” … and, for me, adolescence — I enjoyed the journey even though I had no clue where I was going. The premise was chewable — a sci-fi writer gets caught up in his fantasyland. Makes sense to me. The narrative of the play, however, was not so linear. It skipped around so often, I began to question if I was actually in a theater in Louisville.

This isn’t to say “A Devil at Noon” wasn’t good. The dialogue was effortless and compelling, and it was the main reason you stayed in your chair. The chemistry between lead actors Joseph Adams (as writer Chet Ellis) and Rebecca Hart (as, well, I have no idea, but her name is Lois L.) was tangible and flirtatious.

Chet is a cerebral novelist who never has a simple answer for anything. Perhaps this is why he creates these strange and vast universes where his characters mingle and sometimes approach him for more pagetime. He lives alone and likes it that way. He admits he’s that creepy guy at the bookstore who sometimes goes to check on his books’ inventory. If there are too many, it’s a sign no one is interested in him. If there aren’t enough, then he’s on his way to nonexistence. It’s in this beginning monologue we learn he’s sometimes visited by his characters … and soon we start meeting these strange yet determined fictional entities.

Enter Lois, who shows up at Chet’s door after an AA meeting. He’s charmed enough by her advances to let her in the door, and the two cover everything from religion and pizza to hippies and politics. While Chet is rather structured and firm in his liberal beliefs, he enjoys Lois’ carefree worldview. Lois takes a bite of two-day-old pizza and is in bliss. But, she asks, is the bliss from the way it tastes now or from the memory of how the pizza was when it was hot and fresh? Thus leading her to theorize that religion is just a memory that happened a long time ago, and it should be up to an individual how she interprets that memory.

The play includes a handful of other characters who come in and out of Chet’s daily life — mostly as spies snooping around his house. It’s here where the story truly lost me, and I can’t even begin to explain who they are or what they represent. At one point, I thought they were ants on his kitchen floor. The sound effects and lighting filled out the sparse set and made even the most mundane tasks, like making coffee, interesting to watch. Throw in a projected moon on the stage, an explosion and magnets that no longer stick to the refrigerator, and you’ve got the somewhat bewildering storyline of “A Devil at Noon.”