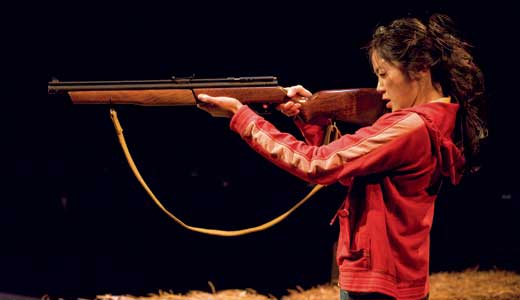 Edith Can Shoot Things and Hit Them
A production by Actors Theatre, part of the Humana Festival of New American Plays. Directed by May Adrales. Continues through April 2 at 316 W. Main St. For tickets or more info, call 584-1205 or visit www.actorstheatre.org.

With perhaps the most engaging title of this year’s Humana Festival, A. Rey Pamatmat’s hilarious and moving script is directed with sensitivity and style by May Adrales. Set in the early 1990s in middle-of-nowhere America, the play examines how a motherless pair of siblings, ages 12 and 16, make their own way in the world, living off the modest bank deposits their absent father makes for them (when he remembers). While their extreme independence is liberating, in the sense that it allows them to stay up late and eat fried rice for breakfast in front of the TV, it doesn’t make up for their feelings of abandonment, or replace their deep need to experience a real childhood.

However, Edith (Teresa Avia Lim) insists you needn’t feel sorry for her and her brother, Kenny (Jon Norman Schneider). They both make straight As at school. Edith even sings in the choir. And as long as she has her huge stuffed frog and her air rifle, and knows Kenny is nearby, Edith can take care of herself. Lim’s depiction of Edith is an absolute joy to watch — she captures not only the nervy energy and physicality of a 12-year-old, but the complexity of Edith’s personality — she is brave, optimistic and wise, but her wit can’t always hide her loneliness and fear.

While Edith insists on taking control of difficult situations and isn’t afraid to rush headlong into battle, her brother Kenny prefers to “patiently and cleverly” assess the battlefield and take precise, careful steps to defeat his enemies. Edith and Kenny are equally tough, but they express their strength in different ways; watching their different strategies in action is fascinating.

In addition to running the household and studying for his advanced classes, Kenny is balancing his relationship with his first boyfriend, Benji (Cory Michael Smith). In the absence of parents, Kenny is free to express his sexuality without fear; Benji’s overbearing mother, on the other hand, is a bit too present in her son’s life and does not approve of her son’s relationship. Kenny and Edith’s home becomes his refuge, and he learns a few important life lessons from them. Smith is adorable, heartbreaking and hopelessly nerdy; even though he appears upbeat and well taken care of, Smith is in serious emotional turmoil, which he portrays achingly.

The show is riotously funny at some points, tear-jerking at others, but, as it tells a story of how a broken family can still manage to triumph, powerful throughout. With costumes that scream the 1990s, along with a set that clearly evokes a Middle American non-working farmhouse, “Edith Can Shoot Things and Hit Them” is a compelling, edgy and hopeful production.