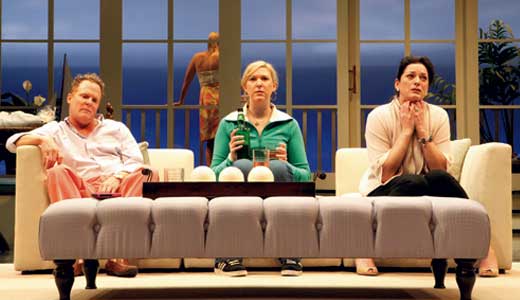 Elemeno Pea
A production by Actors Theatre, part of the Humana Festival of New American Plays. Directed by Davis McCallum. Continues through April 3 at 316 W. Main St. For tickets or more info, call 584-1205 or visit www.actorstheatre.org.

Molly Smith Metzler’s new play “Elemeno Pea,” which made its world premiere last week as part of this year’s Humana Festival of New American Plays, is one of those odd, shape-shifting constructions that leaps headlong into action under the guise of one genre, then suddenly corrects course in a grand attempt to find meaning in another.

That’s all well and good when both parts work in their own right, but only when the first part generates enough fuel to set off an explosive resolution in the second, and only when both parts are deeply bound up with one another.

Alas, that’s not the case here. The play opens as a comedy of manners populated by thinly realized caricatures. The setting is a posh beachfront home on Martha’s Vineyard (nicely designed by Michael B. Raiford, with lighting by Brian J. Lilienthal), where Simone (Kimberly Parker Green), an aspiring novelist (and graduate from an Ivy League college), serves as personal assistant to the unfathomably rich — and, needless to say, indescribably mean and self-absorbed — Michaela (Sara Surrey).

This particular day in paradise isn’t going so well. Simone is having her earthy, irreverent, decidedly proletarian sister Devon (Cassie Beck) out for a long-planned weekend. But Michaela’s marriage is falling apart, and under no circumstances can Simone’s social plans interfere with Michaela’s emergency.

For Devon, who lives at home in Buffalo, works in the kitchen at a chain restaurant, and is surrounded by what sounds like a truly creepy dysfunctional family, Simone’s life of luxury is stunning; as Devon takes in the voice-activated sound system and well-stocked bar, she expresses her shocked appreciation via strings of raunchy, laugh-track ready interjections. Then, once the shock of the new wears off and Devon realizes Simone thinks she’s Michaela’s “friend,” rather than high-priced “help,” the sisters start bickering, as sisters will do, though it’s a squabble of lightweights, more interested in garnering laughs than in landing solid blows.

Along with the three women, the scenario finds room for two men: handyman and groundskeeper Jos-B (pronounced “hose-bee, so called because when he came on board, the family already had another Latino employee named Jose; played by Gerardo Rodriguez); and another fabulously wealthy fellow, Ethan, Simone’s boyfriend.

For most of its length (without intermission), the play is content to tread the predictable waters of comic caricature. And if you value caricature, there’s plenty here to admire. The two sisters are superbly cast. They have just the right look and feel. Green’s patrician profile and well-modulated manner stands in nicely honed contrast to Beck’s swaggering bluster and physicality as they argue about whether money, perks and bennies justify Simone’s decision to sell her soul, time and mind. Surrey endows Michaela with a sense of privilege, an almost operatic approach to her personal woes and an easy expectation that money can purchase everything, including loyalty and friendship (and can buy one sister away from another). Rodriguez plays Jos-B for all the character is worth, all smiles and enthusiasm when Michaela is in the room, smoldering fury when she isn’t, and joyous relish when the chance comes to turn the tables. Pearce’s Ethan dodders about like a charmless, self-centered cousin to Bertie Wooster, and deserves all the laughs he gets.

In the end, though, when a sordid truth from Michaela’s past emerges, the glib comedy gives way to an equally glib climax of self-righteousness that yields an unlikely alliance, at least for a moment. And in the end, it’s a tribute to director Davis McCallum and excellent efforts from Surrey and Beck that a couple of beautifully delivered speeches are powerful enough to capture the imagination and wrest drama from a muddled, melodramatic scenario where the sordid past is conveniently blamed on someone who never finds his way to the stage.