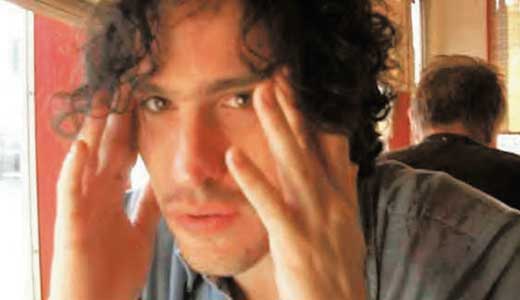 Singer-guitarist Jimmy Angelina and Deer Meet’s new album is called “You Can Walk Across It On the Grass.”

The Weekly Feed, the syndicated show hosted by WFPK Music Director Kyle Meredith, turns two years old, and Meredith is throwing a party Friday at Headliners Music Hall (1386 Lexington Road, 584-8088). Headlining the event is Menomena (www.menomena.com). Formed in 2000, the Portland self-starters recorded some of their earliest songs on Deeler, a program written by singer, guitarist and bells enthusiast Brent Knopf while he was in school. The group’s latest album, Mines, came out in July. Tickets to the 18-and-over show are $12. Doors open at 8 p.m. The excellent and underrated instrumental group Interstates open.

Circuital
That’s the name of My Morning Jacket’s forthcoming album, tentatively slated for an early summer release on ATO. For its follow-up to 2008’s Evil Urges, the band stuck around in Louisville this past winter and enlisted Wax Fang drummer Kevin Ratterman as an assistant engineer. Late last month, the band filmed an episode of VH1 “Storytellers,” which will be aired later this year. Several shows are on the books, but the closest ones are Sunday, April 17, at the University of Kentucky’s Memorial Coliseum in Lexington, followed by Bonnaroo in June.

Meet market
You Can Walk Across It on the Grass is the new album from rock trio Deer Meet, the group led by singer-guitarist Jimmy Angelina (along with drummer Troy Williams and bassist Matt Fleitz). You can stream the entire album at www.deermeet.net.

Jay’s say
Jay Stewart has released a self-titled six-song solo EP via CDBaby.com. It’s the first recorded output from the former Wendells guitarist since his life-threatening car wreck in 1998. The EP was co-produced by Turley Richards. More at www.jaystewartsongs.com.