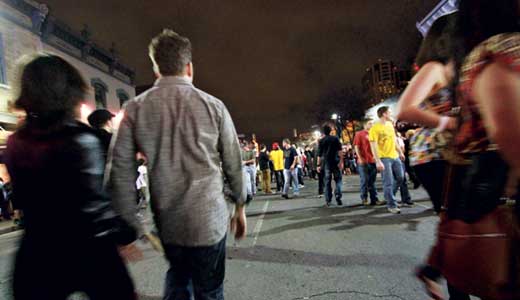 Nobody after The Endtables broke their 30-year silence a little after 11 p.m. last Friday at Barbarella, one of 200 venues hosting showcases at the 25th Annual South By Southwest Music, Film and Interactive Festival. Wearing a jumpsuit and a black-and-blonde-streaked wig, singer Steve “Chili” Rigot towered over the audience as bassist and guitarist siblings Alex and Albert Durig squealed and shredded through opener “Break the Bank, Break the Figurine.”

It was the first time the band had been on stage together in three decades. A crowd of old friends and newcomers, some of whom were in diapers when the band was writing music, absorbed every note, head-banging and grinning ear to ear. Jersey City, N.J., public radio station 91.1-FM WFMU simulcast the set so locals who grew up listening to Louisville’s punk forefathers could tune in.

Kentucky musicians have always had a presence at SXSW, and this year was no different. Independent marketing firm Crash Avenue became the first local organization to host a day party — an unsanctioned afternoon event that often draws more people than official showcases do.

Cheyenne Marie Mize, who debuted solo material on last year’s Before Lately, returned for multiple appearances, as did Lohio, who counts among its members onetime Louisvillian Elizabeth Adams. The Fervor made its SXSW debut with a showcase at The Marq on Congress Avenue. Lexington experimentalist Idiot Glee, aka James Friley, whose material has drawn comparisons to Another Green World-era Brian Eno, kept busy with multiple-day party and showcase appearances. Friley’s debut album, Paddywhack, comes out in June.