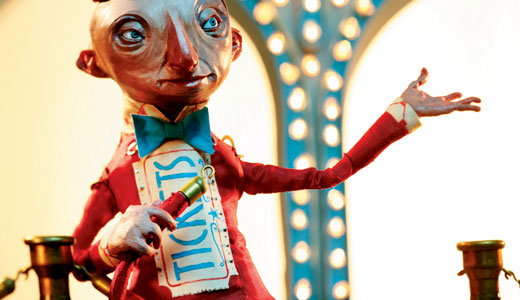 It’s one of those plays where some folks are frolicking through a forest and stumbling into mischief, causing everything to fall apart and come back together in unexpected ways — you know, kind of like “A Midsummer Night’s Dream,” the play on which this script was based. Add a Bollywood dance number and a mud fight, and you’ve got a perfect wedding. “We began our work on this play with an interest in joining the national conversation about marriage equality,” says director Amy Steiger. “It’s a fun, irreverent and occasionally dark look at love that examines the complex relationships between people. Couples fall in and out of love with a blend of music, drama and storytelling that challenges the conventions of theater and of marriage.” —Jane Mattingly

The Louisville Graphic Design Association is hosting a lecture with graphic guru Chris Sickels, the brains and hands behind Red Nose Studio, which produces images for advertisements, books, packaging and the like. In conjunction with an exhibition of his work that’ll be on display at the Green Building through April, the nationally renowned illustrator will give attendees a behind-the-scenes look into his creative process. His distinct, eclectic three-dimensional images have appeared in such publications as Time magazine, The New York Times and The Wall Street Journal; some of his other clients include Target, Microsoft, Random House books and the U.S. Postal Service. He’s been featured in several design magazines, and has twice received the Carol Anthony Grand Prize Award from the Society of Illustrators 3-D Salon. He doesn’t play (reindeer) games. —Jane Mattingly

Jason and Randy Sklar (better known as The Sklar Brothers) are a rarity in Hollywood — identical twins who share an equal passion for the stage and comedy. You may have seen the brothers swing from dramatic to hilarious during stints on shows as varied as “Grey’s Anatomy,” “It’s Always Sunny in Philadelphia” and “Entourage” — and the St. Louis natives are also regular panelists on E!’s “Chelsea Lately.” At The Improv this weekend, the Sklars will bring their unique brand of two-man stand-up that exists somewhere near the intersection of improvisational theater and classic comedy. With both brothers on stage, punch lines have a rapid, tag-team rhythm that pounds the audience in double time. —Brent Owen

Brightside’s annual benefit party is going to feature more than green-draped attendees and a cash bar — this year’s Green Tie Bash ends with a concert by Nappy Roots. Not bad for a party that’s already fun with or without live music. The fundraiser benefits community-wide beautification programs including Blocks in Bloom (a downtown flowerpot program in partnership with Louisville Downtown Management District) and Brightside’s NatureScape Grant. The event will also feature the Acorn Awards, sponsored by the Green Building, and free photos in the Magnolia Photo Booth.

Friday’s must-see pairs two legends entering their twilight years, their relevance stretching far beyond archival images, off-stage drama or PBS biography. Okie Hall-of-Famer Merle Haggard’s timbre is burned into the brains of anyone with an inkling of why Hayes Carll and Eric Church have a foothold today, and Kris Kristofferson’s political voice is almost as reverential as his singing one. Both have lived, sung about otherworldly adversities and become true American treasures. If this concert feels like you’re watching a history lesson, that’s because you are. —Mat Herron

Alex Bell and Aaron Chadwell of OK Deejays have been cultivating their relationship with Mad Decent recording artists for some time, so Friday’s show is kind of like old home week, but with rockin’ beats instead of rockin’ chairs. The Luvstep Tour evolved out of last year’s mixtape produced by Dirty South Joe and Flufftronix. Fluff is Michael Lasday, a Philadelphia producer who has remixed Lil Jon and Diplo, while Joe is part of Brick Bandits, a collective of producers and DJs formed in 2002 that hails from New Jersey, Chicago and Philly. OK Deejays and Introvert, the electronic dance project of Dennis Stein, round out the bill. —Mat Herron

So often ballets are romantic tragedies. It’s a nice change to see a comedic dance with a happy ending. It’s a bonus that it is appropriate for kids. “Coppélia” has touches of fantasy, life-size dolls and myopic love-struck characters all stirred together. Let the wackiness ensue. I’m not giving anything away by revealing Coppélia is the name of a female wax doll (the dance is nicknamed “The Girl with Enamel Eyes”). The ballet centers on two villagers, Swanhilda and Franz, and their reaction to her.

The first appearance of “Coppélia” was in 1870 at the Paris Opera. This year’s performance is the 35th anniversary of the ballet redesigned by Louisville Ballet legends Alun Jones and Helen Starr (after Marius Petipa, who restaged it in 1884). —Jo Anne Triplett

U of L Baseball

Yes, Birdie, baseball is back. While the pro teams have reported for spring training in Florida and Arizona, the college nines are already in regular season action — including the high-flying University of Louisville Cardinals, who won a school record 50 games last season. Louisville got off to a fast start in 2011, whipping Michigan, Ohio State and Minnesota in the Big East/Big Ten Challenge in Florida in February. This weekend at Jim Patterson Stadium, the Cards host a three-game series with Kent State. Friday’s game features $1 hot chocolates and beers (through the first four innings). Admission is free. —Bill Doolittle

If you love the environment but only express it by pre-sorting your Brightside bin or letting your yellow mellow, then check out the Kentucky Waterways Alliance Wild & Scenic Film Festival. By the time it’s over, you’ll likely be chaining yourself to endangered sea otters like a bona-fide activist. Films like “Eastern Rises,” which chronicles the adventures of fly fisherman, and “Slow the Flow,” which tells the story of cheap, low-tech and green solutions to real world problems, aim to “inspire advocacy, and offer people a direct way to get involved locally,” says KWA executive director Judith Peterson. A special VIP reception (for $10 more) starts at 7 p.m., with catering provided by Wiltshire on Market, Kentucky Ale and Riverbend Winery. Tickets can be purchased at KWA’s website. —Jonathan Meador

To me, March has always been the month for waiting. The leaves and the flowers don’t come out fast enough; fields are too muddy to frolic in. Recently, local artist Mary Cobb created a project that brings to light — and brings out the depth of — our times of having to sit or stand in anticipation. With the help of some friends who contributed essays, the result was one-of-a-kind book “Waiting and Being.” Cobb sees how waiting brings stress and strength to the spirit — as she’ll share when discussing and signing at Carmichael’s. Poet Nana Lampton will also be on hand, talking about her new nature-focused collection, “Bloom on a Split Board.” —T.E. Lyons

Glass is green. Seeing a new use for old things is what recycling is all about, an idea glass artist Sungsoo Kim felt he could use in his art. “Finding new uses for discarded objects is one way to breathe life back into objects around us,” Kim says. “To see art where others see trash is one thing, but to lead others to see that art for themselves is what artists have been engaged in since the turn of the century.”

His kiln-cast glass series “Rediscovery” is full of brightly colored forms made in molds of Styrofoam and other consumer products. His inspiration? The container of a new computer. You can play “guess the packaging” during the March 4 First Friday Trolley Hop. —Jo Anne Triplett

Visual artists make good musicians — or is it the other way around? Anyway, Joel Pinkerton and Patrick Donley are two artists with feet in both camps. Pinkerton’s humor is at play here, and he’s inviting the public in on the fun. His “musical instrument” is made of harmonica reeds, organ pipes and wood, and he invites all to join the “The Organ Donor Cacophonous Hand-Pump Choir” by playing the sculpture. Donley, as a member of Slackshop, is an honest-to-God musician. His sculpture isn’t actually musical; “Discordant” refers to his art’s neo-Dada style. His use of found objects creates “works that attempt to explore the ugly side of these materials, to exploit their rawness,” he says. “Discordant” will be on view from 6-9 p.m. during the March 4 First Friday Galley Hop. —Jo Anne Triplett