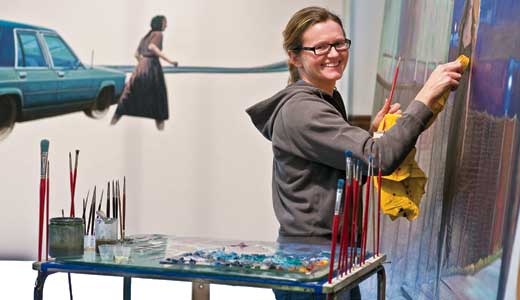 After his first love affair in Paris, the Polish-born pianist and composer Frédéric Chopin came away with only a handful of letters and a single faded flower, which he bundled together and placed in a package he called “My Sorrow.” From that image you might think of Chopin as a delicate and overly romantic artist hopelessly torn by unrequited love. You would be right. But as a star in the salons of the rich and intellectual, it was not long before Chopin started attracting the romantic attentions of the French novelist who called herself George Sand. That would also be Chopin — the adored. This week, pianist Seung-Un Ha appears with the Louisville Orchestra performing Chopin’s “Piano Concerto No. 1.” Then, in an astounding change of mood, the orchestra also presents Dmitri Shostakovich’s “Symphony No. 8.” Jorge Mester conducts. —Bill Doolittle

Transferring photos is a sticky hobby — artist Rebecca Simpson has gotten her fingers accidentally glued and taped together many times since she became interested in the delicate process of transferring photographs onto scrap wood. “It’s all kinds of sticky,” she says. “I’ve seen other artwork I assumed was a photo transfer, and I always wondered how they did that, so I read some blogs and tried some methods, and this one works for me.”

Her first show in the medium, “Twitterpated,” features scenes of birds with clever sayings on each piece — from “Eat. Tweet. Love.” to “Purple is the new black.” The opening reception on Thursday will include green beer … for all you looking to be arty and Irish. It goes from 5-8 p.m. —Sara Havens

Record-label executives once told this 2010 Country Music Hall of Fame inductee that his music would never connect with a broader audience because, in his words, “it was too laid back.” Yet listening to Williams sing of universal themes of love and friendship on “You’re My Best Friend,” it’s obvious that it’s the suits who are disconnected. Country to the bone, Williams’ humanity is his calling card. “I don’t think there’s anything we have to do daily in our walk that’s more important than how we deal with each other,” he says on his website. “To me, it’s everything. So when you’re looking for songs, if they can express that, then you’ve found something special.” —Mat Herron

When Swanson Reed Gallery closed earlier this year, co-owner Chuck Swanson hoped to have a final blowout for all the longtime artists, customers and staff. This is it, folks — the “going away party” for the gallery in the Highlands (Swanson Reed Contemporary at 638 E. Market St. remains open).

It’s a doozy. Swanson is selling art by many local favorites, including Art Snake, Valerie Sullivan Fuchs and Shayne Hull. There are 28 artists in all, with prices from 40 to 80 percent off. The gallery has added some contemporary crafts, furnishings and what they’re calling “22 years of abandoned art … and weird cheap stuff.” The end date of March 26 is not firm; Swanson says the party will last “until the art runs out.” —Jo Anne Triplett

Sponsored by the fine folks at the Louisville Kennel Club, the first-ever “Shelter Dog Olympics” will showcase the feats and talents of shelter dogs across a variety of events designed to make the viewer liquefy into a quivering puddle of cuteness-induced humanity. “This is about opening the door to all dogs and celebrating how much they’re really capable of doing,” says LKC Board Chairman Steve Fox. “We would much rather see them running around an agility course than abandoned on the street or sitting in a shelter.” Interested parties can enter their rescued or adopted canine for a paltry $5 fee, so long as the dog is at least 6 months old and is current with its rabies vaccination. —Jonathan Meador

Meaning “poem of deep song,” “Poema del Cante Jondo” is a production inspired by and dedicated to Federico García Lorca, considered the greatest Spanish poet and dramatist of the 20th century. Presented by Louisville-based nonprofit arts organization FlamencoTalk, the show will feature internationally acclaimed dancers Antonio Granjero, Felix de Lola and Ricardo Anglada performing some hot, fresh choreography. This rich, classic art form has withstood the tests of time and the challenges with which the arts community is constantly faced; performances like these remind us that flamenco is more than just fancy skirts and castanets. Using Lorca’s passionate verses as their guide, these musicians and dancers from all over the world are sure to create an astonishing theatrical experience. ¡Olé! —Jane Mattingly

Frazey Ford was one-third of Canadian folk outfit The Be Good Tanyas, and Sunday’s inaugural gig at the former Skull Alley carries a hint of that flavor — fellow Tanya Trish Klein will play backup. As last year’s solo record, Obadiah, demonstrated, Ford has stories to tell. She takes to the mic with charm and grace, bending everyday emotions every which way. Though she was raised in a commune by parents “fleeing the Vietnam War,” Ford’s style is remarkably centered, tackling the lonely ambitions of a solo career while distinguishing herself from an increasingly crowded field of femme folkies, many of whom are a little too comfortable walking in Joni Mitchell’s footsteps. Leigh Ann Yost opens. —Mat Herron

Sarah McLachlan recently made the announcement that Lilith Fair is kaput. So how do emerging female singer-songwriters find an audience, and vice versa? For a handful of Nashville-based musical women, the current answer is “No Divas Tour,” coming to The Bard’s Town. Playing in the round and supporting each other’s performances, this concert offers harmonies coming from a number of directions. Kira Small leans toward soul, while Jenn Franklin has an edgier folk-pop style. Roxie Randle’s an Americana artist who’s played the Bluebird Café, and Sabrina has come from gospel roots to a prominent place on the Nashville Songwriters Tour. Sunday evening’s show is bolstered by The Dulcet Darlings, another pair of women (Rebecca Williams and Kayla Brown) who’ve made the most of joining forces onstage. —T.E. Lyons

When blues guitar legend Bo Diddley made his final recorded appearance on “You Got to Wait,” a duet on Hamilton Loomis’ 2007 album Ain’t Just Temporary, he completed a cycle of musical inspiration. Loomis, considered by many critics as one of the most promising players in the blues guitar circuit, paid his dues in Galveston, Texas, but his true eureka moment came in 1992 during his first meeting with Diddley. The 16-year-old Loomis approached the master backstage at one of his concerts and blew him away with his spot-on Diddley renditions. Flash-forward nearly 20 years and Loomis is blowing away audiences with his combination of thick soul, light funk and deep-running blues. When Diddley died in 2008, it closed a life chapter for Loomis, who still frequently pays tribute to his mentor with frequent Diddley covers at his live shows. Consider the torch passed. —Ryan Reed

While enjoying your wine and cheese at Proof, have you ever noticed the large portraits in the dining room, each showing a woman walking? Who are these women, and where are they going? The paintings are the work of Louisville artist Monica Mahoney, who also did the sparkly red limousine that’s parked outside and the mirror-covered convertible called “Blind Spot.” This series of paintings, “Women Walking,” is coming down this month, but not before Mahoney gives an artist talk, during which she’ll discuss her creative process and present clips from films that inspired the project. She chose five independent and foreign films because of their obscurity, and because they each included a scene of the heroine walking — a symbol of their personal transitions in the films. —Jane Mattingly

Cats can do some pretty weird shit — that’s a given. But have you ever seen them ride a skateboard, roll a barrel, walk on a tightrope or play in a band? That’s the gist behind this traveling show of feline acrobatics. All the Amazing Acro-Cats were adopted from shelters by trainer Samantha Martin, who teaches them amazing tricks and travels around the country touting the importance of “clicker training.” Her cats have been featured on TMZ, Animal Planet, “The Tonight Show” and elsewhere. The all-ages show pounces on the Kentucky Center on Tuesday and Wednesday. Maybe you’ll learn some pointers on how to teach your cat to grab a beer from the fridge … or just get her to use the litter box properly. —Sara Havens

“This is not Penthouse stuff,” says mixed media artist Lisa Austin. “It is not nasty.” Now that I have your attention, let me tell you about Austin’s new exhibition: Her work uses found objects mixed with vintage photographs of nude women. These images, once provocative and salacious, now seem downright tame, even quaint, and have become a signature of sorts for Austin. “Vintage images always attempt, not always successfully, to have an aesthetic quality,” Austin explains. “Of course, that fits in nicely as a starting point for making them into a work of art. They are tasteful images. (By) using vintage or found objects, some of which seem out of context, I can begin to build on that artistic quality.” —Jo Anne Triplett