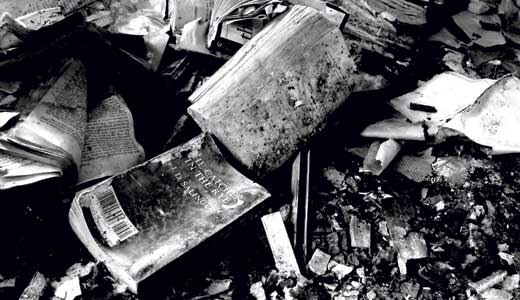 It’s a storytime hour for adults — and it’s one where you’re allowed to eat and drink while listening, and your feet and butt won’t fall asleep from sitting on the floor. Isn’t it fun to hear a story aloud once in a while? In the days of yore, that used to be how it was done, and in this case, the authors will be reading their own work. Our storytellers are a Highlands-based writing group who call themselves the Grasmere Writers, and they’ll be performing dramatic readings of some of their funny, sexy short stories. Members Rick Neumayer, Joe Peacock, Michele Ruby and Robert Sachs are published, award-winning writers from Spalding University’s MFA Writing program. —Jane Mattingly

It’s great to have a fine writer lead a discussion on his or her important book, but it’s even more compelling when the author is asked to speak about that work from a challenging perspective. Isabel Wilkerson conducted 1,200 interviews in studying the 1915-1970 northward/westward migration of African-Americans for her book “The Warmth of Other Suns,” which recently won the National Book Critics Circle Award. Wilkerson is giving a lecture at the Speed Art Museum on “Gender and the Great Migration.” The author, daughter of a Tuskegee Airman, has won a Pulitzer for her reporting, and she’s now a journalism professor and director of narrative nonfiction at Boston University. This lecture, which continues an annual series for women’s and gender studies and is part of U of L’s Women’s History Month, precedes a reception and book signing. —T.E. Lyons

It’s always been her own vision behind the music, but by now, Shannon McNally has thoroughly established an indelible style on record and in concert. Not only does that put the stake in the never-shoulda-happened Sheryl Crow comparisons, it lets McNally feel easy about taking little detours like the one that brings her to Headliners. Her brand-new album Western Ballad has just come out, but she’s eschewing the typical “where can we headline with the full band?” tour for acoustic pair-up shows with bluesman J.J. Grey. The calling card for McNally’s new album is a title track written by Allen Ginsberg, but the effect of that winding song is matched by many solid collaborations with producer-guitarist Mark Bingham. Sometimes McNally’s best moments are when her reedy voice latches on to the melodic countryside of roots-rock, but she keeps you intrigued with stretches of questing, philosophical lyrics, which she sometimes complements with her own quixotic guitar solos. —T.E. Lyons

The act of folding paper can be as simplistic as making a kid an airplane. For the elaborate, jaw-dropping, “How was that done?,” head on over to Origami Weekend. To get up close and personal with the art, KMAC’s origami exhibition features more than 15 works by international artists. It continues through April 4.

There are two ways to learn about origami: The documentary “Between the Folds” will be shown on Friday, March 25, at 7 p.m. There is no separation between art and science in this film, as it tells the story of 10 scientists who became “paper folders.” If you want to give origami a try, there’s a workshop taught by James Peake (his work is in the exhibition) on Saturday, March 26, from 1-3 p.m. ($15 members, $20 non-members). —Jo Anne Triplett

Jeanne Robertson has a knack for doling out unorthodox advice — like why it’s not a good idea to antagonize secretaries, or send a man to the grocery store, or go rafting without a Baptist in the boat. With a twang a la Julia Sugarbaker, this self-described “Southern humorist” brings her wit and wisdom to Louisville as part of a national tour promoting her recently released DVD, “Don’t Bungee Jump Naked and Other Life Lessons.” Robertson has an impressive comedic résumé, including two shows on Sirius XM Radio and more than 10 million hits on YouTube. Oh, and she’s a former beauty queen, crowned Miss North Carolina in 1963 before going on to win the title of “Miss Congeniality” in the Miss America Pageant. Pretty, funny and nice — what a package. —Sarah Kelley

Roommate’s keyboard-and-drum-based tracks often seem cautiously bemused. It’s not just the floating-but-not-spacey sonic décor of nearly funky shuffling folk-pop, heavy-weighted quasi-rhythms or effects that are lightly industrial (i.e., tape-machine abuse and studio squonks). Kent Lambert sings as if he just discovered a lost song-trove of prime-period Todd Rundgren and early Steely Dan piano ballads, but his band helps him imbue the results with the not-quite-post-irony that has come around in the intervening years. Ultimately, of course, this is all Brian Wilson’s fault, but the Chicago-based Roommate likely won’t directly reveal that when they play Zanzabar — they’ll be too busy re-creating the odd, headphones-demanding sound of its new album, Guilty Rainbow. Tropical Trash and Humongous are also on the bill. —T.E. Lyons

This month, the work of photographers Carole Elchert, Phyllis Banis and Andrea Van Vorhis hangs in the main library at U of L, displaying the images of their separate journeys to the American West, Asia, Europe and Africa, captured over the last 20 years. Part of Women’s History Month, the three photographers will hold a lecture to discuss their exhibit, “Converging In-Sight: Photographs of Pilgrimages on Four Continents.” Elchert will start off by discussing the themes of the exhibit as a whole: return, remembering, renewal and revisioning, and how the camera can be used as an artistic tool. Banis will then share some dos and don’ts of landscape photography, and Van Vorhis will take attendees on a walk through the gallery and answer questions. —Jane Mattingly

Student Activities Center, U of L

Have you ever wondered who will be the next Hurricane Summers? Perhaps you’ll find him here at “PINK,” the annual student-produced drag show at U of L. In its 14th year, “PINK” will be emceed by Reva Devareux, will feature both seasoned veterans and first-timers, and the proceeds will support LGBT groups commonGround and BlkOut. “For me, the joy of doing ‘PINK’ every year is that it brings our students together with the larger community and lets them see that they belong to a loving, diverse family of supporters,” says coordinator Brian Buford. “Now more than ever, LGBT students need to know they are part of the larger fabric of a supportive community.” —Sara Havens

It’s not quite love at first sight for Beatrice when she is introduced to Benedict. And Ben doesn’t think much of Bea, either. But their friends plot to hook them up anyhow, and the romantic adventures that ensue form the plot of Hector Berloiz’s comic opera “Beatrice and Benedict” — which is based on the Shakespeare play “Much Ado About Nothing.” The U of L School of Music’s Opera Theater sings the two-act opera in English in performances this weekend at the Bomhard Theater. When the idea of matrimony is proposed to Benedict, he tells his buddies they might as well hang a sign on his house reading: “Here you’ll find Benedict, the married man.” A sad story of how a good man lost his better judgment. —Bill Doolittle

Authors John Holl and Nate Schweber will be signing their new book “Indiana Breweries” Saturday, April 2, at Rich O’s, and Sunday, April 3, at Bank Street Brewhouse & Brasserie in downtown New Albany. The book takes readers on a tour of the nearly 40 breweries around the Hoosier state. Holl is associate editor for Beer Connoisseur Magazine and has written for the Indianapolis Star and The New York Times. Schweber is a freelance writer whose work has appeared in The New York Times, Rolling Stone, Budget Travel and The Village Voice. —Kevin Gibson

Rock the Night for Youth

For more than 20 years, the Louisville Youth Group has created a safe place for LGBT youth where they can socialize, learn, grow and generally feel welcome. The nonprofit organization mentors more than 200 youth a year through weekly programs, a leadership course and summer camps. The funds raised at Sunday’s Rock the Night for Youth event will go directly to LYG. The musical lineup includes Robbie Bartlett, The Sirens, Amanda Lucas & Audrey Cecil and Most Wanted, a band who has been playing weekly gigs just about as long as LYG has been around. There will be raffles throughout the evening, and I hear tickets to Churchill Downs are up for grabs. Full disclosure: I am hosting the event, but hopefully that won’t keep you away. Do it for the kids. —Sara Havens

With Louisville going through yet another art upheaval right now, we can gather inspiration from the late artist/entrepreneur Leo Zimmerman. Zimmerman, aka Leo Wrye, knew Louisville’s 1950s arts community well. Upon his return to the city after living in Paris, he founded the Society for the Arts in Louisville, Arts in Louisville magazine and an arts festival. Zimmerman’s work on display includes large geometric abstractions, digital art, lacquered kinetic sculptures known as “Slue Balls,” and a cast aluminum door panel, made in collaboration with the late sculptor Barney Bright, from the Louisville Public Library.

The show will be open during the April 1 First Friday Trolley Hop from 6-9 p.m. In addition, there is a panel discussion on “Louisville’s Arts Future” at 5:30 p.m. —Jo Anne Triplett

It case you missed the official date, spring started Monday. To get us in the mood for flowers, trees and all growing things, Kaviar Forge & Gallery is showing the group exhibition “Landscapes.” Each of the eight Kentucky artists (Brian Bailey, Catherine Bryant, Lynn Dunbar, Bob Halliday, Billy Hertz, T.B. Jackson-Williams, Lloyd Kelly and Mark Selter) has his or her own interpretation of the season. Jackson-Williams’ mosaics of torn paper resembling leaves and flowers, Bailey’s natural mix of trees and rock, Selter’s golden early morning scene — all scream “get outdoors.” Even a sunblock baby like myself is feeling the need.

A public reception for the artists will be during the March 25 FAT Friday Trolley Hop from 6-9 p.m. —Jo Anne Triplett