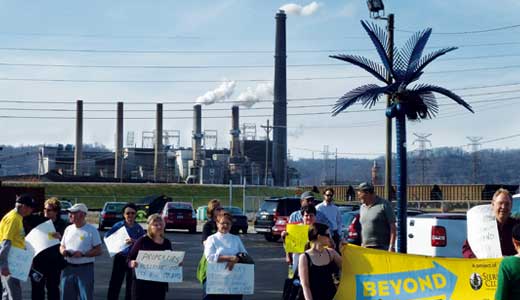 As a result, residents could get the chance to voice their concerns with the Kentucky House of Representatives’ Natural Resources and Environment Committee and its longtime chairman, coal industry darling Jim Gooch, D-Providence, who is considering holding an interim session in southwest Jefferson County this summer.

Calls to Gooch’s Frankfort and home offices were not returned.

“I’m very hopeful,” says state Rep. Joni Jenkins, D-Louisville. “It’s a first step, and I’m very grateful that (Gooch is) giving me this opportunity to show the folks on the committee how a lot of people in Kentucky are living. I know that on a lot of environmental issues we see things very, very differently, but I think that all of us can put ourselves in the place of folks who walk out onto their front porch every day and see this.”

By “this,” Jenkins means the smokestacks of the Cane Run plant and its neighboring ash ponds, which are not lined and, as a result, leech sulfites, heavy metals and other carcinogens into nearby groundwater, according to testing conducted by the Kentucky Division of Waste Management and Kentucky Waterways Alliance.

Nonetheless, Jenkins remains optimistic about Gooch’s intentions despite his committee’s refusal during the regular session of the general assembly to hear her House Bill 237, which would have (among other things) mandated that LG&E line its ash ponds and develop an emergency evacuation plan for residents in the event that its pond breach in a fashion similar to the 2008 Kingston, Tenn., spill that inundated surrounding countryside with more than 1.1 billion gallons of toxic coal sludge — enough to fill 1,660 Olympic-sized swimming pools.

Due to Gooch’s track record, some don’t share Jenkins’ optimism.

“I don’t really have high expectations, to tell you the truth,” says Sarah Adkins, a graphic designer from Pleasure Ridge Park who attended last week’s rally. “I’m well aware of how the Kentucky legislature feels about environmental problems, so I’m not expecting him to have some sudden moment of redemption once they come here and go, ‘Oh god! Coal ash kills people!’ But I definitely think that maybe (Gooch) and some of the others will become more aware of the fact that there are neighborhoods full of sick people and sick children, and we’re killing them.”

The 946-page EPA ruling mandates that new air quality standards prohibit up to 91 percent of mercury emissions from being released by coal combustion. Due to the proposed limitation of mercury and other particulate matter from being released into the air, an estimated 17,000 premature deaths can be prevented each year, according to the EPA. Mercury is a known carcinogen that is especially devastating to children, causing damage to the nervous system and inducing developmental defects such as reduced IQ and mental retardation.

While the new rules won’t officially take effect until November — and full compliance is still years away — LG&E and local air quality regulators are already busy determining what the effects will be in Jefferson County.

Matt Stull, a spokesman for the Metro Louisville Air Pollution Control District, says that, if anything, the new standards will potentially strengthen the city’s regulation of mercury emissions, which the APCD does not currently monitor.

“It should also be noted that one of the reasons we needed the (Strategic Toxic Air Reduction) program here in Louisville was that the … standards sent down by the federal government weren’t working for us,” Stull says. “They weren’t doing enough to reduce risk from certain toxins. It may very well be that this standard for mercury will not be anything stricter than what we have; however, we can be more strict than the federal government, but we cannot be less.”

Industry representatives say they will fully comply with the new guidelines, but they lament the financial burden they must impose on their ratepayers to offset the costs.

“If you look at it in terms of the bigger picture, with all of the EPA regulations that are coming down the pike, it’s safe to say that will increase costs to customers across the nation,” says Brian Phillips, an LG&E spokesman. “With all of the air and coal combustion byproduct regulations, we’re expecting it’s going to cost us $4 billion to adjust to these regulations by 2019. It’s a lot of expense for compliance, and at the end of the day, we’ll be compliant, and we’ll look at the most cost-effective way to get there, and we’ve even had some results in coal retirements, because we have to balance everything with a regulatory requirement to provide energy in a low cost way.”

Reynolds wouldn’t say whether LG&E would seek a rate increase from the Kentucky Public Service Commission to pay for new guidelines, but suffice it to say his concerns about deferring costs onto customers contrast sharply with those who factor in the hidden costs of coal.

“If I can pay a few more dollars so that my neighbor’s child doesn’t suffer, or that my neighbor doesn’t have to have cancer, I think that’s totally worth it,” Adkins says. “(Environmental regulations are) also going to save us money in the long run, because if people aren’t sick from coal ash, we’re not going to be paying more in tax dollars to pay for their health care costs if they are lower-income people.”

According to a 2009 report published by the National Research Council, the United States loses approximately $120 billion each year in hidden costs associated with burning coal, petroleum, natural gas and even hippified ethanol; most of that amount comes in the form of expensive, taxpayer-subsidized health care services utilized by lower-income individuals living near coal-fired power plants and their requisite ash ponds.

The findings of the National Research Council report were magnified earlier this year when a new study — conducted by the Center for Health and the Global Environment at Harvard Medical School — bumped that $120 billion figure to nearly half a trillion dollars a year in hidden costs, positing that mountaintop removal mining-ravaged Appalachia alone is robbed of $75 billion annually in terms of the effect of coal pollutants on public health and wellness.

“I think we’re moving in the right direction,” Rep. Jenkins says of the ruling. “My constituents in my district are paying a lot more in terms of their health and property values … than a lot of other people in Jefferson County, and I think it should be a burden that we all share.”