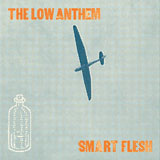 These guys met on a wooden-bats-only baseball team, and the band’s website says that Smart Flesh was recorded in an abandoned pasta sauce factory in Rhode Island.

That sounds like the worst brand of contrived hipster nonsense until you hear the results. It’s in the same vein of pretty, under-styled folk-rock as The Avett Brothers, but with the Yankee twist you’d expect from a bunch of Brown graduates. They have the timeless quality that is inextricably conjured up by music based around a harmonica and an imperfectly tuned piano, but they avoid becoming a parody of folk. Sure, there are moments when their earnest brand of Americana veers into corniness, but for the most part, they’re spot-on. The Low Anthem really knocks it out of the park with “Ghost Woman Blues” and “Love and Altar.” Equally creaky and vibrant, Smart Flesh will keep you company until the spring thaw.