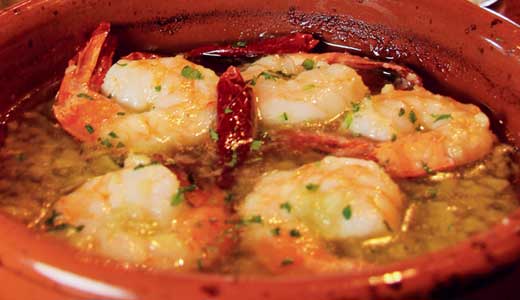 Mary’s dish towered on her plate, an architectural construction of mashed potatoes, beef tenderloin, Cabrales blue cheese and a nest of sweet potato curls, piled high and reaching for the sky.

My entrée lay flat enough to slide under the door, a long, oval flatbread topped with shredded duck, goat cheese and green herbs.

“Hey!” someone in our group said with a laugh. “We’ve got horizontal and vertical food.”

Round food and square food and just about every shape in between, too, as our table of seven happily ate our way through a substantial selection of small-plate tapas at the deservedly popular Mojito Tapas Restaurant in Holiday Manor.

Mojito has become such a fixture on the Louisville food scene, it’s hard to believe it opened only about three years ago. It began as a sibling of Havana Rumba, which now has a location in Middletown in addition to its original spot in St. Matthews.

I was eager to get back to Mojito, which I last reviewed in the fall of 2008, to see how it was faring since co-owner Fernando Martinez left town to run a resort in Venezuela, turning his chef’s toque over to Pedro Hernández, who joins general manager Marcos Lorenzo as owner of Mojito and Havana Rumba.

Answer: It is faring well indeed. The baton has been passed without missing a step or making any obvious changes to a successful formula. We enjoyed an expansive meal without encountering any serious flaws in the food, mood or service.

Mojito Tapas Restaurant, as its name implies, specializes in tapas, a tradition that originated in Jerez, Spain, home of strong, sweet sherry wine. Hundreds of years ago, the outdoor cafes of Jerez came up with the idea of placing a small plate atop one’s sherry glass as a cover (literally, tapa) to keep out fruit flies. As long as the plate was sitting there, why not put a snack on it? Behold the birth of the tapa.

Mojito’s tapas aren’t just Spanish, though, and they aren’t entirely Cuban. More than 50 tapas, plus paellas and bocadillos (sandwiches) cover the ethnic waterfront from Cuba, Spain and Catalunya to Mexico, Argentina, the Caribbean and more. Sharing is encouraged — our gang filled the table with small plates for passing around — and hardly a tapa on the table cost more than $10. If you choose the paella, be prepared to wait an hour for this classic Spanish treat, which is available only for two ($34) or four ($68).

Mojito’s full bar boasts a short but well-chosen wine list, with most wines under $30, or $7 to $9 for a glass. The beer list features mass-market American brews and a selection of bottled beers from Spanish-speaking nations. Margaritas, mojitos and a variety of martinis fill out the drinks list; I went native with a caipirinha ($8), a Brazilian favorite, tart-sweet with cachaça (similar to rum), cane sugar and plenty of lime in a short glass packed with crushed ice.

As I said, we went with a crowd. Mary and I, along with our friends, cut a pretty good swath through the tapas. Among highlights:

The Boniato Frito (sweet potato fries, $4) are crispy on the outside with dark-orange, steaming interiors and a sweet Caribbean yam flavor. A ration of Mojito’s home-smoked honey added a new flavor dimension.

Croquetas de Jamón y Pollo, aka ham and chicken croquettes ($6), were icons of the art of frying. Four crunchy, golden-brown, deep-fried ovals were stuffed with a savory, gently spicy filling of finely chopped ham (Spanish serrano) and chicken. They were plated on a red piquillo pepper sauce that evoked the deliciously nostalgic flavor of the pimentos that normally stuff green olives.

Gambas al Ajillo (garlic shrimp, $8) came out sizzling in a shallow ramekin. Five tail-on shrimp swam in a bubbly bath of olive oil and chopped garlic. Sliced Blue Dog bread, perfect for dipping in the garlicky oil, came alongside, with a tub of garlic aioli and a decent, if somewhat out-of-season, fresh salsa.

Datiles Rellenos (stuffed dates, $8) looked appetizing and lived up to their promise. They consisted of three large dates, stuffed with mild Capriole goat cheese from Indiana, wrapped in applewood bacon, drizzled with smoked honey, stabbed with a tiny silver fork for eating like a lollipop, and plated on more of that pimento-flavored piquillo sauce.

Espinacas a la Catalana (sautéed spinach, $6) was a Caribbean spin on wilted spinach salad, loaded with toasted pine nuts, diced Granny Smith apples, and red and gold raisins, dressed with Spanish sherry vinegar. A heavy hand on the vinegar left a tart pool in the bottom of my bowl, but it was splendid until I got down to that point.

Mary’s vertical-food choice, Solomillo al Cabrales (sirloin with Cabrales, $9), provided a remarkable serving for under 10 bucks: A tender grilled beef tenderloin was perched on rich, smooth mashed potatoes, with a crown of tangy blue cheese and an artful mound of crisp-fried sweet potato curls. A dark port wine reduction sauce and a green herb sauce made an artful design on the plate.

Several of our group were wooed by the solomillo; others spoke well of the Pescadillo Frito (fried fish, $6, a Cuban version of that Louisville treat), crisp breaded-and-fried whitefish strips with garlic aioli replacing the familiar tartar sauce; and the Cuban sandwich ($10), a well-made rendition of the standard, that piled roasted pork and ham with Swiss cheese, pickles and mustard on a small loaf of hot, pressed Cuban bread.

There was no room for dessert, but we couldn’t pass up something as rich, yet delicate, as Flan de queso de Cabra ($7), a classic flan made with goat cheese, plated with fresh berries and a silken ball of cajeta ice cream (goat-milk dulce de leche).

The café con leche ($4) was smooth and rich, the café Cubano ($4) dark-roasted and strong, the Cuban answer to espresso.