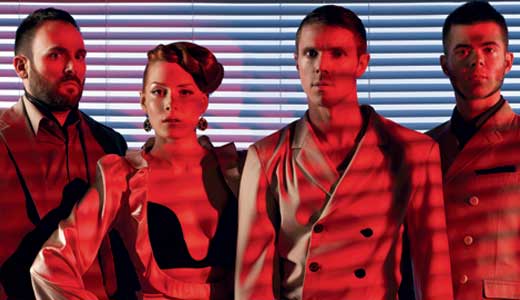 Scissor Sister Jake Shears delayed his hotel checkout yesterday to talk with LEO Weekly about the band’s current tour with Lady Gaga, which stops here Saturday; scoring a musical; and the difference between celebrities and professionals.

LEO: Did you know Lady Gaga when Scissor Sisters were playing New York’s club circuit?
Jake Shears: No, but she knew us. She attended a bunch of our shows and loved the band. We didn’t find that out until we met years later. When she was making her rounds in New York, we were probably gone on the road.

LEO: What went through your mind when Night Work debuted at No. 1 on Billboard Indies and inside Billboard’s overall Top 20?
JS: That was crazy. It was really exiting. It goes to show that we’ve got a great (audience) base in America. Every one of our albums has debuted in the top 20 in America. It means a lot to us.

LEO: How has songwriting in the band evolved?
JS: Lots of different ways. It can start with me and (multi-instrumentalist) Baby Daddy, and sometimes it’s the three of us, sometimes it’s (singer) Ana (Matronic) and Baby Daddy. It doesn’t matter who writes it or how it’s written, it just matters that there’s a great song in the end.

LEO: Tell me about the musical.
JS: It’s called “Tales of the City,” and it’s based on a novel by Armistead Maupin. It takes place in San Francisco in 1976, and it’s San Francisco bohemia meeting the upper echelon, high society of the city and what sort of trouble ensues. I’ve written all the music with (Sisters keyboardist) John “J.J.” Garden. Jeff Whitty is writing the script; he won the Tony for “Avenue Q.” He brought the idea to me, and I’m a huge fan of the book; it was a real coming-of-age novel for me.

LEO: You recently interviewed Dolly Parton for Logo. How much different is she off camera?
JS: She’s the same. I don’t think she changes. She’s not a chameleon. She’s very consistent. I interviewed Jane Fonda for OUT (magazine) — she’s one of my idols, and Carly Simon. I thought I was going to be an entertainment journalist while I was interning at Paper Magazine in New York. Interviewing bands and writing pieces — it’s still something I love to do.

LEO: What does interviewing these people tell you about celebrity and fame?
JS: The people I interview and love don’t feel like celebrities — they’re professionals. There’s a big difference between a celebrity and a pro, and I feel like they’re very different things. That’s my aspiration to be a professional. I have no desire to be a celebrity; that world and that self-regard is not exciting to me.

LEO: What is Lady Gaga like offstage? People here want to know.
JS: She’s lovely, smart and a hard worker. She’s curated a crew and dancers that are a pleasure to work with and be around.

LEO: New album on the horizon?
JS: Definitely, but it’s hard (to write) when you’re on the road. I have the musical opening in San Francisco in June that I’ve been working on for four years. The great thing about technology these days is you don’t need much. Baby Daddy and I both have (portable recording) rigs we carry in backpacks. We’re camped out all day here tomorrow in Boston writing. We don’t sit around on our hands. Baby Daddy and I have this weird fire under us; I don’t know if it’s guilt or what, but if we’re not working, both of us feel worthless.