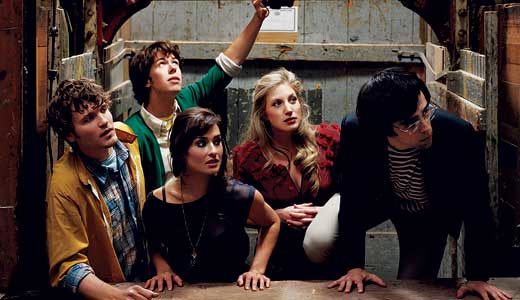 Ra Ra Riot took on new collaborators for their sophomore effort, last year’sThe Orchard — some parts of the album were produced by Death Cab For Cutie guitarist Chris Walla, some by Vampire Weekend guitarist-keyboardist-beat-maker Rostam Batmanglij. The teamwork is paying off. Riot made their TV debut in January on “Jimmy Kimmel Live,” and “Too Dramatic” is getting into the rotation on MTV. Ra Ra Riot performs Friday at Headliners Music Hall alongside Cincinnati’s Pomegranates. Tickets for the 18-and-over show are $14. Doors at 8 p.m.

Singer Steve “Chili” Rigot says The Endtables have plenty of unreleased material and have not ruled out making another album. The band reunites for the first time in 30 years Friday at Barbarella, in Austin, as part of the 25th Annual SXSW Festival. “We’ve got probably two records worth of material,” Rigot says. “We were even talking about — if things go well — if somebody wanted to do something after this happens.”

Rigot estimates the band, which includes brothers Alex and Albert Durig, has close to 100 rehearsal tapes, mainly because friends were always coming over to their band practices. “We always had people watching us during rehearsal,” says Rigot, a retired social worker. Albert lives in Argentina and is flying in for SXSW; Alex will be commuting in from San Francisco.

The Endtables were one of Louisville’s first punk bands. Although they never toured, the band’s 7-inch releases have gone onto net hundreds and even thousands of dollars on auction sites like eBay. Physical copies of its self-titled reissue, which Drag City released last April, have now sold out. While there are no firm plans, Rigot says a new record is a “strong possibility.” “We’re waiting to see if there’s enough interest. It’s ‘What would you do if …?’ It’s a strong if.”