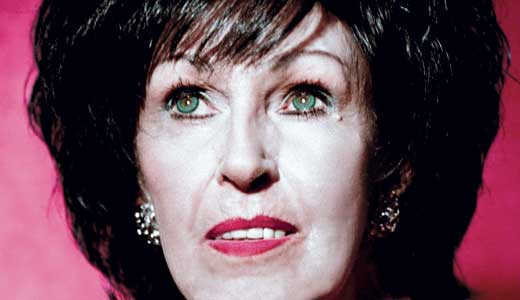 Why is this lady in her 70s being treated like royalty as she prepares to appear at Headliners?

Wanda Jackson started singing professionally as an Oklahoma teen in the mid-1950s. She became a hard-working rockabilly artist who attracted the professional — and for a time, personal — interest of Elvis Presley. Her songs like “Fujiyama Mama” and “Let’s Have a Party” ran high up the charts then. In later years, she had country hits, and, in the ’70s, her records hewed toward gospel. For decades since then, fans and musicians have been pulling her back into the not-infrequent resurgences of rockabilly.

Not long ago, she sought out White Stripes/Raconteurs/etc. star Jack White to see if he’d like to sing a duet. He countered by saying he’d like to help make an entire album for the Queen of Rockabilly. With the sort of ready-for-anything spirit you can still hear in Jackson’s great growling voice, she jumped at the opportunity. Speaking on the phone to LEO, she said, “For the new generation that’s never heard of me, Jack’s name on the product will validate me in their minds.”

The Party Ain’t Over has indeed brought validation — plus appearances on David Letterman and Conan O’Brien, and invitations to so many prominent gigs that she’s had to tell her new bookers to ease up. It’s not at all like at the start of her career — an age when concert tours were matters of rugged barnstorming even for a teenage star: “I dressed in service stations, greasy-spoon cafes. I had to stop and run in and get in the ladies’ room to change my clothes. One time, there was so much water on the floor, I had to put the lid down and stand on the toilet stool to try to get my hose and shoes on.”

The Party sessions worked over a dozen songs, including nine covers White suggested. The results have a few gently affecting cuts but also surprising swing (“Rum and Coca-Cola”) and several horn-stoked charges through classics like “Shaking All Over” (which she calls “straight-up rock ’n’ roll”) and “Rip It Up” (“a song I still do every night”) and a revision of Dylan’s recent rave-up “Thunder on the Mountain.”

As for which new song is Jackson’s favorite for performing night after night, it’s “the song that I was really worried about recording in the first place — ‘You Know I’m No Good.’” The Amy Winehouse number had Jackson balking until White, as she says, “softened up the second verse for me. I said, ‘I won’t record it with that verse,’ and Jack said, ‘Well, I didn’t expect you to,’ and he rewrote it. That helped a lot. It was a different type of song for me to do, but that’s good. That’s what this whole album has done — it’s stretched me. Jack pushed and pushed until they got the performance … kind of like that 18-year-old spirited gal I started out singing as.”

Jackson is feeling renewed by this fine new album and the re-energized concert schedule. She considers what Jack White has brought to her and says, “He pushed me into the 21st century.”

But when asked whether this century could’ve held a welcoming place for her one-time beau Elvis, she seems of two minds. “I knew him at the beginning of his career — the really good years,” she says — but bemoans how “his life was already so altered.” She prefers to remember how much strength she always heard in his voice: “Whatever shape he was in, that voice never changed. Do you realize that when you listen to his records?” Jackson is certainly a woman who understands what it takes to make a great voice last.