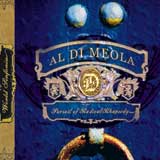 Imagine a continuously evolving film score shifting through French, Latin and American themes. The expertly performed Pursuit of Radical Rhapsody is more than 70 minutes of entirely instrumental compositions that constantly flirt with progressive-fusion indulgence but never descend into full-on jam-band territory. It recalls like the masterful proficiency of Rodrigo y Gabriela, backed by bad-ass jazz and genius accordion work. There is a strong prog backbone, but in-your-face shredding takes a back seat to infectious and relaxed grooves. The record reaches for the epic several times, and while I was initially skeptical of going out with “Over the Rainbow,” it’s an undeniably beautiful interpretation. Di Meola has spent more than three decades building his reputation as one of the best jazz guitarists ever to play, and his latest effort proves yet again his status as a world-class virtuoso.