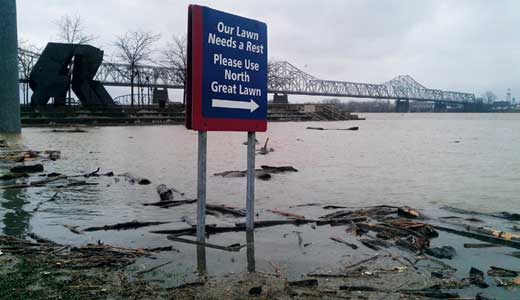 Like most people who live and work near Juniper Beach, Andy Will was caught off-guard by the quickness of the water.

“It came up so fast,” Will says about the week-long Ohio River flooding that has consumed the northern shores of Jefferson County, closed stretches of River Road, and once again highlighted the importance of the city’s aged water pumping stations.

“We’ve had about 6 feet of water on our first floor,” says Will, owner of Juniper Beach Docks and a nearby apartment building. “The docks we have are built to withstand it, and they’ll certainly take a lot higher (water) than this. They’re set to go another 20, 30 feet … but the apartment building — there is some damage to it. (The river) came up so fast that we did lose a couple of things in there, but for the most part, that building was built to withstand the floods. Nobody lives on the first floor anyway.”

According to the National Weather Service, the river crested Saturday evening at 26.6 feet — less than half the height of its crest during the Great Flood of 1937, whose 57 feet inundated 170 square miles of Jefferson County from mid-January to early February. Higher-than-predicted Louisville-area rainfall and runoff from melting snows in New York, Pennsylvania and other parts of New England are to blame for the most recent flood.

The worst flooding occurred north of Brownsboro Road — including Waldoa Beach, Transylvania Beach and Juniper Beach — where low-lying topography makes it among the widest floodplains in the county. LEO received reports that some flooding occurred in the Riverview Park area in southwest Jefferson County, but for the most part, the West End was spared this time.

The waterlogged Captain Quarter’s restaurant, which closed its doors last week due to the rising river, was, at the very least, spared the fate of Covington’s Jeff Ruby’s, a floating riverside restaurant that was swept away by the current, ultimately held in place by a flotilla of rescue boats.

“My property has flooded so often, so frequently, that we’ve got it down pretty much to a science,” Will says. “We get everything out as best we can when water comes in. When water goes out, you wash it out and put your stuff back. Just another day in paradise.”

Despite losing a hot water heater and a furnace, Will’s matter-of-fact attitude toward the flood damage to his property underlies a romantic acquiescence to the destructive whims of Mother Nature that’s common to shoreline communities in the more affluent parts of northern Jefferson County.

Bud Schardein, executive director of the Metropolitan Sewer District, thinks that attitude was less common a century ago, as modern flood pumping systems had yet to be developed and the general population was far more susceptible to flooding than it is now.

“Anyone who wanted to live that close to the river was going to basically bear their own responsibility for it,” Schardein says. “So when they did build the pumping system after the ’37 flood, I think their goal was to protect the most populated areas of the community, places like west Louisville, Portland and Butchertown.”

Following the Great Flood, the U.S. Army Corps of Engineers designed and installed a series of concrete and earthen levees that would, over the span of several decades, ensnare 29 miles of the county within a flood-proof sheath. Work was also begun on a series of aforementioned pumping stations that now number 15, and include the Beargrass Creek pumping station, whose 2.5 million-gallon capacity makes it the second largest of its kind in the world.

Since then, that system has been tested multiple times, most recently in 1997 when a 10.48-inch deluge soaked Kentuckiana over the course of several days and resulted in approximately $200 million in property damage.

Different was the Aug. 4, 2009, flash flood, which dumped 7.2 inches of rain into the city’s sewers in less than two hours. Whereas the ’09 and (to a lesser extent) ’97 floods taxed Louisville’s drainage infrastructure and called into question the flood-promoting urban policy of non-absorbent vacant lots riddling the city’s West End, the Ohio River’s current flooding addresses another potential infrastructure inadequacy — that of the 15 pumping stations, nine of which Schardein says are more than 50 years old and need to be replaced sooner rather than later.

“We maintain them, I think, very well, but you don’t drive around a 50-year-old automobile,” he says. “We’ve changed out the oldest one in Butchertown, and we’re changing out the next oldest one now in western Louisville. I’d like to see us be able to do at least one every two years until we get the other nine rehabilitated, because, you know, I’m not over-playing it: If you fail at one of those pumping plants when the river’s up and you have a rain like today, you have no way of pumping that inland water into the river, and you become New Orleans.”

MSD recently made a $17 million improvement to the system via $5 million in federal stimulus funds steered into the district by U.S. Rep. John Yarmuth, D-Louisville, as a result of the ’09 flood. But since the nation lacks a coherent, well-funded infrastructure policy, Schardein says that money was the last of its kind his department might see: He says it could take as long as 20 years for all of the stations to be upgraded per MSD’s projected spending appropriations. With the city facing a $22 million budget shortfall in the coming fiscal year, the 62-year-old Schardein predicts he won’t be around to witness the final upgrades.

“We need a national infrastructure policy,” Schardein continues. “I get wound up about it, because President Franklin Roosevelt signed the National Flood Protection Act of 1936. It’s still on the books, and all the flood protection systems that were built on the Ohio River were built with 50 percent federal money, 50 percent local money. And that act still calls for a 50/50 split on improvements to the system. But the federal government doesn’t (spend on) public infrastructure anymore, so apparently neither do we.”

Aside from the $5 million in stimulus funds, Yarmuth has appropriated nearly $840,000 to the Army Corps and to MSD to shore up the district’s flood-prevention capabilities. Like Schardein, he too laments the lack of infrastructure funding.

“It’s smart policy to invest in infrastructure projects — like flood prevention — that create jobs now and strengthen our community for the future,” Yarmuth tells LEO. “I would like to be able to say that I am confident Congress will make critically needed infrastructure investments, but in this reckless environment where the Republican leadership is so willing to put politics ahead of sound policy and the economic future of the American people, it’s hard to imagine.”