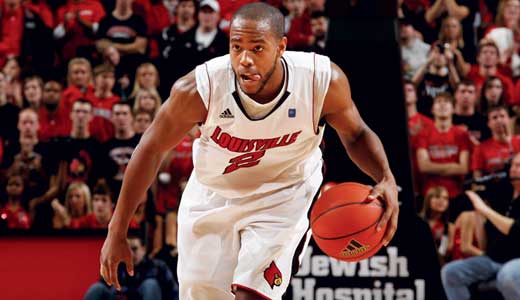 In a day and age when everyone with an above-average ability to put a ball inside a hoop is reminded how special they are at least a hundred thousand times before they graduate high school, Rick Pitino is a harsh dose of reality.

As hard as it may be to believe, the man who redefined modern full-court pressure and who took advantage of the three-point shot like no one before him has become old school.

It’s not a coincidence that the attrition rate during the Pitino era at U of L isn’t exactly sparkling.

Though he came to Louisville as a two-star recruit with zero other major scholarship offers, Preston Knowles is not an exception to this rule.

While there have been notable instances of praise — “I wish I could coach 12 Preston Knowles’” — Pitino wasn’t nearly as quick to applaud the Winchester native’s effort or progress during his first three years at Louisville.

On multiple occasions, Knowles has been described as being in Pitino’s “doghouse,” the most recent occurrence coming last spring. At various times, Pitino has criticized Knowles’ decision-making, defensive effort and shot selection. Though Knowles has been widely regarded as a lock-down defender since the moment he set foot on campus, just a year ago, Pitino referred to then-senior Reginald Delk as “the only above-average defensive player on the team.”

But as with any particularly vexing test or trial, those who persevere and survive are eventually rewarded.

No one plays up his seniors like Rick Pitino. Once practice started last October, Louisville fans were bombarded with quotes like “Preston is the unquestioned leader of this team, everyone looks up to him,” and “Preston Knowles will never have senioritis, he truly plays for Louisville, he’s not concerned about his future.” It’s not that these words of praise aren’t genuine, but in the past, it’s likely they were a tad overblown.

There’s been talk that Pitino and Knowles sat down for a brief one-on-one at some point in late February. Details of what was said are unsurprisingly scarce, but the gist of the one-sided conversation was reportedly that this team has put itself in a position no one ever thought it would be in, and that it’s up to the senior captain to take things even further.

If what has happened since then is any indication, the conversation definitely took place.

To put it in a way only Louisville fans — who for multiple years have identified Knowles with a simple exclamation point — will understand, Preston has been even more Preston! than usual. He has increased his offensive production in all three major categories (scoring, rebounding, assists), been more vocal during games, and has taken on the additional role of Peyton Siva’s backup at point guard.

When/if Louisville is knocked out of the NCAA Tournament and Knowles has played his final game as a Cardinal, it’s not a stretch to say it will mark the end of an era for the program.

Pitino will welcome one of the nation’s top recruiting classes next fall, and there’s another one prepared to enter the fold 12 months after that. U of L also will bring in controversial, but highly talented Wake Forest transfer Tony Woods, who will be eligible to see the floor once the fall semester of 2011 ends.

There is nothing wrong with going after the best high school talent in the country and certainly nothing wrong with landing a handful of those guys, but let’s be honest — there’s going to be a dramatic change in climate after this season.

With assistant coach Tim Fuller and Pitino doing what they’re doing in the recruiting world, I’m not sure it’s going to be possible for a story like Knowles’ — an in-state recruit with only one other scholarship offer (Virginia Commonwealth) becoming a senior captain and leading scorer for a Louisville team ranked No. 11 heading into the NCAA tournament — to happen again anytime soon.

And that’s why what he has done, especially this season, is so important. Look at this quote from Knowles on the day before his senior night game against Providence:

The man has established himself as a teaching tool for years to come.

Pitino will always be able to talk about the two-star recruit who encouraged teammates to put egos aside for the betterment of the team (one which featured zero NBA-ready talent), and the remarkable results that followed. Perhaps more importantly, the current underclassmen have a model by which to self-govern the blue chip talent and egos about to hit the program.

Regardless of how he or the team he captains fares from here on out, Preston Knowles has made a mark on Louisville basketball.