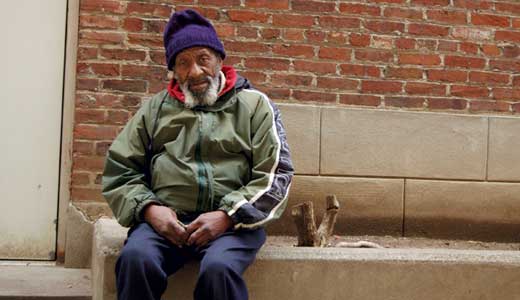 On a cloudy Monday morning, a dozen people sit at a conference table in Metro United Way’s downtown Volunteer Connection building to discuss the fate of the homeless in Metro Louisville.

Sponsored by the U.S. Department of Housing and Urban Development and Kentucky’s regional Office of Community Planning and Development, the aptly titled “Homeless Summit” brought together experts across various fields — from law enforcement to public housing to veterans’ affairs representatives and more — for a roundtable discussion on the state and future of homelessness and outreach to at-risk populations in the city.

At issue were changes to federal guidelines, improving communication between police and service providers, shoring up funds for acquiring new and potentially reclaimed vacant properties for supportive housing, and forming a “pipeline committee” that would efficiently shepherd projects like construction of new housing across multiple agencies from conception to reality.

Front and center of the discussion were amendments to the McKinney-Vento Homeless Assistance Act, which were enacted by Congress in 2009 under the legislative acronym HEARTH (aka Homeless Emergency and Rapid Transition to Housing). HEARTH changes the traditional approach of curbing homelessness from building emergency shelters to providing long-term housing, fostering economic self-preservation, and preventing homelessness in the first place. As such, it represents a paradigm shift in the federal government’s penchant for treating homelessness like a natural disaster that can be fixed by a magic number of FEMA trailers.

“We like to say it’s chemical dependency or domestic violence (that causes homelessness), and they do feed into the issue,” says Mary Frances Schafer, director of community coordination at the Coalition for the Homeless. “But the No. 1 issue is that they can’t pay their bills. A lot of people are working, which is good news and bad news; but it says something about our community that people may be employed but they still cannot make it.”

Indeed, data provided at the meeting reveals that in Louisville, 26 percent of homeless people have jobs, and 10 percent work full time.

Little wonder, then, that nearly one-third of those who became homeless in Louisville in 2009 cited their inability to pay a mortgage or rent as the primary reason they ended up on the streets, in a shelter or on the couch of a friend or family member.

Absent for this part of the discussion was the Louisville Housing Authority, whose executive director, Tim Barry, was present for the beginning of the meeting but left after about an hour. Under Barry’s direction, the Housing Authority has done its best to implement the federal HOPE VI program, which aims to promote scattered-site, mixed-use, multi-income housing that has, so far, done little to alleviate the deluge of nearly 20,000 individuals on the city’s Section-8 housing waiting list.

With roughly 7,000 foreclosed properties in Jefferson County, some were wondering what could be done to immediately reclaim them for their intended purpose: to house human beings.

“We simply don’t know how many properties are really out there — how many units are out there that we could utilize if we had access to them?” Schafer says. “And then to try to figure out how much building do we need to do (in addition to that).”

Since 2004, agencies and service providers in Jefferson County have been collating data entered into the Homeless Management Information Systems (HMIS), which acts as a kind of database designed by HUD to track the homeless population by requiring jurisdictions to keep tabs on what kinds of services are used by the homeless and for how long, among other criteria.

“This has been huge for us,” says Natalie Harris, executive director of the Coalition for the Homeless. “It’s the first time we’ve been able to use HMIS services and … it’s really changed our knowledge about what’s working and what’s not working.”

Before the implementation of the federally mandated HMIS, agencies like Harris’ were forced to rely on anecdotal evidence as the primary means for discerning how resources are to be allocated — a process that often leaves providers with more assumptions than facts. Now there’s enough data in the system to finally reap dividends, as it allows HUD to more accurately allocate funding.

“We’ve tried very hard to deal with the homeless from viewpoints of sympathy,” says Katharine Gale, an independent housing consultant who led the day’s discussion. “But now with hard data (from HMIS), it allows us to see (that providing housing) is a good public investment.”

Also discussed was the role played by Louisville Metro Police, whose First Division includes the majority of downtown’s entertainment districts (namely Fourth Street Live and the KFC Yum! Center). Officers in this division primarily deal with so-called “quality-of-life” and panhandling issues related to vagrants and their interactions with businesses.

“It ties up resources a lot,” says First Division Lt. Matt Meagher. “Just the other day, we had a homeless gentleman who was so intoxicated that he used the restroom on himself, right there on the sidewalk. So we called it in, and we got fire, EMS and police tied up on just one individual.”

And those resources don’t come cheap. A 2008 study conducted by the University of Louisville found that it cost $89 million over two years to provide for nearly 7,000 homeless adults in the form of transitional shelter, which is among the most expensive and unsustainable forms of assistance. The same study found that providing long-term housing to the same population would save taxpayers $6.4 million.

“Instead of taking them down to the drunk tank, we take them into a program that puts them into a home, then we have the potential to save a lot of taxpayer money,” says Joe Hamilton, of Metro Housing and Family Services.

And although there are a handful of agencies that provide street outreach to police to deal with the homeless, all agree better coordination is needed.

Of course, the elephant in the room was the specter of the roughly 11,000 homeless students enrolled in Jefferson County Public Schools. Although JCPS sent a representative to the summit’s second half, which drew upwards of 60 people, some were miffed that the representative failed to attend the morning’s planning session.

“It is so hard to get JCPS to do anything,” says Pat McKiernan, outreach coordinator for the Kentucky Department of Veterans Affairs. “I had an HIV outreach program (in one of the schools), and they kicked out all my outreach workers because they brought condoms in with them. Condoms! They say, ‘You can talk about it, but you can’t mention the word penis or vagina or condom.’ It’s ridiculous, and it’s the same thing here: You can’t give us the real numbers, so you can’t truly acknowledge the homeless children population.”

Many of the program coordinators and nonprofit directors expressed concern over JCPS’ reluctance to share information, particularly on homeless families, and advocated getting the Mayor’s Office and the Jefferson County Sheriff’s Office involved to address policy and truancy issues, respectively.

“When you’re at home, do you need to be told to be abstinent? To not use drugs? To be a good parent? No,” says Gale, who provides consulting services throughout the country. “All you need is to pay your bills and keep a roof over your family’s head. A lot of our programs are still under the idea of ‘we know what’s good for you,’ and a lot of people on the street know this. It’s something that’s thankfully changing: It’s not about being punitive; it’s about having your own place.”

Homelessness by the numbers

• In Metro Louisville, 56 percent of people experiencing homelessness have completed high school, some college or have earned a college degree.

• On the night of the 2009 homeless count, veterans represented one-fifth (21 percent) of the homeless.

• On a single night in January 2010, 1,626 persons in Louisville were identified as homeless.

• More than one-quarter of homeless individuals in Louisville have jobs, and 10 percent work full time.

• Nearly one-third (31 percent) of respondents to a 2009 survey said they became homeless due to an inability to pay their rent or mortgage.