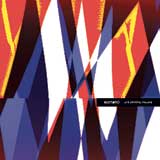 In press materials describing Guitaro, the terms “shoegaze” and “disco” get bandied about liberally. While the first part is obvious enough, the disco part isn’t all that convincing. No complaints, though. The band formed in 1997 in Vancouver and has mostly toiled in obscurity, but that might be of its own doing. JJ’s Crystal Palace is only the group’s second full-length in 14 years. On its newest, the trio manages to capture a sound both lo-fi and expansive, hitting the density of shoegaze’s touchstones but doing so with a bedroom vibe. The disco descriptor probably comes about from the electronic-sounding drums, but the songs’ walking tempos and layers of sound put Guitaro more in the tradition of the Jesus and Mary Chain than the Bee Gees. Again, no complaints. Whatever you call it, it’s good.