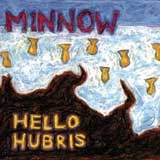 Local punk rockers Minnow played their last show a little more than four months ago, and the band’s second album, Hello Hubris, stands as the group’s claustrophobic swan song. Comprised of an all-star cast of former Endpoint, Second Story Man, Red Nails and Your Food members, the band wastes no time delving into the skronk and squeal that dictate the course of the whole record. Crunchy bass lines drive the eight-song set, while Doug Maxson attacks the guitar as though it were more an obstacle than an instrument. Hooks abound, but all the melodic and sugary elements of pop-punk are doused in gasoline. “One Jump” takes a bouncy rhythm and pulverizes the hooks, while album closer “Whale Canon” finds primary vocalist Rob Pennington writhing over a slithery guitar line in a sort of anti-pop that’s rewarding in its audacity. Or maybe it’s hubris. Either way, Minnow will be missed.