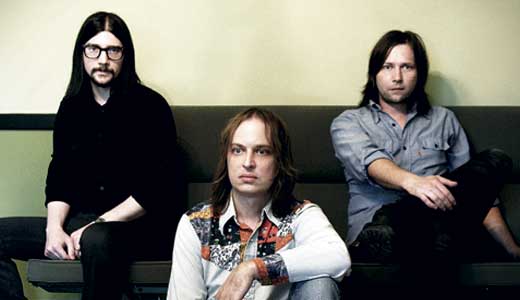 Bassist Jack Lawrence stays busy. Besides lending his dirty, hard-hitting fretwork to The Raconteurs and The Dead Weather (both with Jack White), Lawrence has found his niche as a studio musician, appearing on recent albums by Wanda Jackson and Karen O.

But this soft-spoken, bespectacled rock veteran originally made a name for himself as a member of Cincinnati garage/soul act The Greenhornes.

“I think of The Greenhornes as my first home,” Lawrence says, reflecting on the band he considers his “main project.” “That will always have a lot of importance. It’s like asking your parents which kid you like more. That was my first one. I’ve been in it the longest, and it’s really important to me. It’s great that we’re able to still be doing it and that we’re getting ready to go on another tour.”

The Greenhornes’ sense of unity and excitement has been on the backburner for a while now. Their latest album, the heavily soul influenced (and cleverly titled) Four Stars, is their first full-length since 2002’s psychedelic Dual Mono. Soon after Dual’s release, Lawrence and drummer Patrick Keeler heeded the call of The Raconteurs, and vocalist Craig Fox started playing with local Cincinnati bands. They briefly re-formed for 2005’s five-song East Grand Blues EP, but even then, it was clear The Greenhornes needed a break.

“We were a little burned out,” Lawrence says. “Also at that time, the record label we were on kinda just shut down, so we didn’t have a place for any music we were writing. So we all got busy with other projects. It just kinda gets away from you. It was when we were doing our first interviews for this album that someone brought up the fact that it’s been eight years since the last album, and I was like, ‘Wow, it’s been that long?’”

With Four Stars, Lawrence and his bandmates have emerged rejuvenated and prepared, in true rock fashion, to embrace the unexpected. “Whatever happens, happens,” Lawrence says. “We have that feeling again to really do it up, and we’ll take The Greenhornes as far as we can. I think we’re really looking forward to these tours and then making a new album that isn’t eight years in the process.”