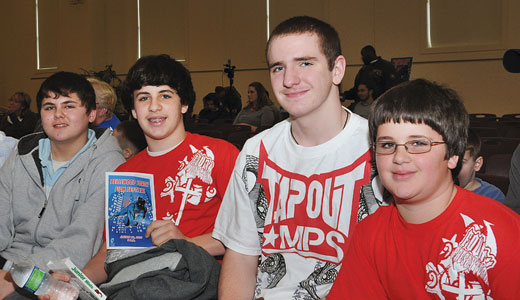 We’ve all seen that kid in the camcorder section of the electronics store. She stops in her tracks after spotting herself on the showroom televisions. The recognition usually begins with a simple hand gesture, followed by a complex series of bobs, weaves and snaky, Axl Rose-type slithers. The trance breaks when a parent calls “Let’s go,” and, forever changed, the child reluctantly exits frame. But not without a goofy parting shot — perhaps a variation on the moonwalk that’s closer to John Glenn than Michael Jackson.

It’s fascinating to watch, maybe because most of us can recall our earliest exposure to the camera’s eye. Film and video allow us to see ourselves in ways mirrors can’t reveal, and to express ourselves with more depth than perhaps any other tool. Sally Pendleton, a founder of the Bellewood Home for Children’s Youth Film Festival, agrees that these first glimpses of the self can be giddy, profound and often life-altering.

“When we video ourselves, or video a story, and then are able to see that back, to see ourselves in that, that is so empowering,” Pendleton says. “This creates an avenue for youth to express themselves in a way that is unique.”

Pendleton, the VP of development and community engagement at Bellewood, explains that part of the festival’s mission is to raise awareness of the children’s home. Established as an orphanage 162 years ago, the nonprofit’s primary focus today is to facilitate independent living and provide a “consistent adult presence” for children in need. Pendleton outlines a “cradle to career” game plan that entails following their kids into post-foster care and early adulthood. She says it’s this period that is the most tenuous; eight out of 10 will fail on the outside without a supportive adult — “failure” meaning incarceration, homelessness or addiction.

“It’s so important to connect these kids with supportive adults,” she says. “And we want that relationship to exist until the age of 25, because that’s really what it takes to reach maturity.”

So what does their film festival have to do with independent living? The recent addition of video production at Bellewood provides more than just a creative outlet: It prepares children for adulthood. Pendleton’s list of potential benefits includes project management, teamwork and problem solving. Although Bellewood’s kids don’t participate in the competitive aspect of the festival, they are responsible for producing a “signature video.” This is where Pendleton sees the young filmmakers learning delegation, responsibility, scheduling and overcoming obstacles like bad weather and missing actors.

“Over the six-week period, it’s like the cream rises and they figure out what their talents are. ‘Oh, I’m a writer’ and ‘I’m a director,’ and ‘I like to edit,’” says Burke. “It’s been great to watch them blossom into a team.”

The competition is open to young filmmakers between the ages of 12 and 18; films must not exceed five minutes in length. Participants are urged to use “whatever resources they have to produce a video,” and must reference an American icon, mention the word “grit” and work under the theme “the spirit to succeed.” The organizers say these guidelines have yielded a vast array of interpretations.

Pendleton is sometimes astounded by the quality of work, given the ages of the participants. With cameras continuing to get smaller and more affordable, equipment seems to be falling into children’s hands at ever younger ages. Both Pendleton and Burke agree that the younger generations are becoming savvier quicker, mentioning that the festival already has its share of veteran directors. For some of the kids, these are not first films.

The number of submissions to the Bellewood festival has increased each year — so has the community’s level of involvement. This season, Oscar nominee Jennifer Lawrence will lend her voice to a taped greeting for the filmmakers. Kosair Charities has also thrown its weight behind the event by coming onboard as a sponsor. Liz Everman, from WLKY, will host the event and award cash prizes to the top three films.