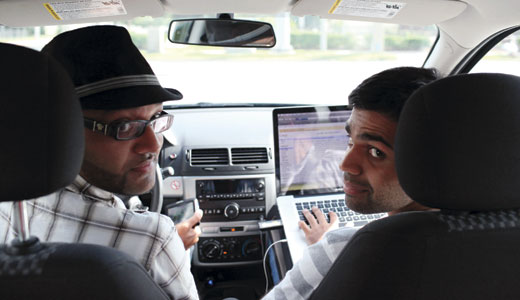 “Dude, it’s just a mosque,” blogged Aman Ali, a New York writer and filmmaker after a visit to Park 51. The infamous “Ground Zero Mosque” is where Ali and partner Bassam Tariq kicked off their cross-country web project, “30 Mosques in 30 Days.” The launch coincided with the start of Ramadan, as well as the ongoing ferment over the Islamic center’s proximity to the World Trade Center.

Surprisingly, the only tension the bloggers encountered during their Park 51 prayer session was a headache from the mosque’s “ghetto sound system.” Despite the constant coverage of protesters and would-be Koran burners, a security guard stationed at the entrance told Ali and Tariq that things had been relatively quiet all summer.

Perhaps the numerous media dispatches, like those from Pastor Terry Jones’ Dove World Outreach Center in Florida, represented a smaller swath of Americans than media exposure might suggest. This separation of perception and reality was exactly the point of Ali and Tariq’s journey: a 30-day, 13,000-mile trip meant to provide readers — and, for that matter, the bloggers — with a deeper understanding of what it is to be Muslim in America.

With its neutral tone of voice and all-American road trip structure, the “30 Mosques” blog makes headway in demystifying Islam. Muslim or not, for anyone who’s driven hungry while pushing on to their destination, it’s easy to relate to these fasting travelers. This is especially so when Ali and Tariq encounter those familiar bumps in the road: car trouble in Montana, or the pointed, roadside police interrogation in a post entitled “Alabama: Epic Fail.”

More important, though, are the many complexions of Islam that are presented along the way. For too many of us, this many-sided religion represents only one thing. “30 Mosques” reminds us that each of the millions of Muslims in the United States are indeed individuals. In one of the blog’s photo essays, we meet a congregation of middle-aged, rural whites who worship on a farm outside of Philadelphia — a city, incidentally, where it’s not rare to see meter maids in head-coverings.

Closer to home, in one of the project’s more enlightened posts, we meet a white, Lexington architect who began designing mosques in the South after converting to Islam. His stories about zoning committees and public hearings reveal a lot about where this growing population stands in places like Kentucky and West Virginia. It may also say something that Ali and Tariq — presumably at “Brian’s” behest — chose not to picture the man or use his real name.

The “30 Mosques” project concluded on the last day of Ramadan (which, coincidentally, was on Sept. 11). Since their last stop in Dearborn, Mich., it would seem Ali and Tariq have experienced a relapse of their wanderlust. The duo’s current speaking tour, “Tales from the Ramadan Road Trip,” makes a stop Thursday in Louisville: home to approximately 10,000 Muslims, seven mosques and zero Koran burnings.

The event is hosted by the World Affairs Council of Kentucky at the ballroom of the Hyatt Regency Downtown. To read more on Ali and Tariq’s trip, visit www.30mosques.com.