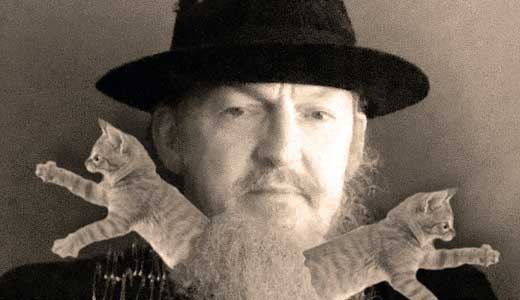 Poet Ron Whitehead with a few of his furry friends.

For months, professorial poet Ron Whitehead has scoured Louisville Metro’s opaque nether regions in search of 100 feral cats to be part of a choir for his upcoming track on Louisville Lullabies 2. The compilation, which Whitehead appeared on last year, is a menu of local artists performing covers of popular lullabies.

“Why Split Hairs?” will feature a call-and-response between Whitehead and his feline friends for a group he’s calling Whitehead & The Whiskers. Out of the goodness of his heart, Whitehead has given the cats a lift to each practice by toting them on his reverse-Rob Zombie dust-tower beard.

Pre-production rehearsals have yielded mixed results, though, thanks to a rambunctious quartet of 3-year-old calicos. “They haven’t yet learned to put the ‘ow’ before the ‘me,’ as it were,” says Whitehead, who is nonetheless excited to add “feline conductor” to his résumé.

“Prince has nothing on this shit!” Whitehead says, referring to the musician who penned the classics “Purple Rain,” “Sexy M.F.” and, yes, “Pussy Control.”

Whitehead doesn’t deny recording this many untamed beasts will try his patience. “We’re cleaning out all the 2-gallon milk jugs at Highlands Kroger,” he says. “We’ll have kitties hanging from the microphones. Only live takes.”