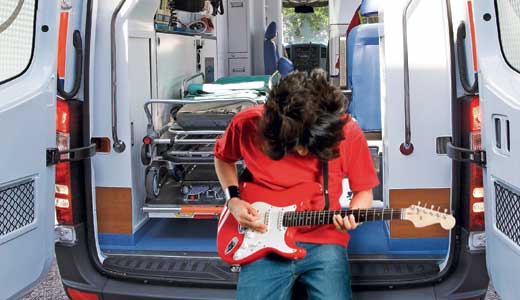 Jewish Hospital announced recently that it will create a wing devoted to ailing musicians’.

Now that he’s dutifully employed by Bonnaroo creators AC Entertainment, Forecastle founder J.K. McKnight is ditching the Merrells in favor of a suit and tie. There’s only one problem: “I don’t know how to tie one, so I had to ask my mom,” McKnight says. “I just turned 30, and I’ve never worn a tie in my life.”

Courier-Journal pop music critic Jeffrey Lee Puckett resigned yesterday after being asked for the 10th time to pull a weekend shift as a cops reporter. “I write about rock ’n’ roll, not death and destruction,” Puckett said as he left the newspaper’s offices at Sixth and Broadway. “Shit’s depressing.”

Last Saturday, your average run-of-the-mill DJ stormed out of Zanzabar bleeding after breaking his fingernail on an iPod. “It was right between ‘Love Lockdown’ and my favorite remix of ‘Teenage Dream,’ the one where Katy Perry auto-tunes the chorus,” the DJ, who elected to remain nameless, told WHAS-TV. “I wouldn’t have this problem with turntables.”

Kid Rock and Louisville hip-hop have one thing in common: They both suck like a Hoover on a dusty floor. Lack of skill, originality and a penchant for hyperbole are to blame.

Your jeans are too tight

Really. We’ve tried to warn you, but you keep wearing them. Stop before you cut off circulation for good and lose a leg.

Administrators at Jewish Hospital broke ground on a new hospital yesterday that will create a special wing for musicians. Buoyed by the number of benefit concerts held to raise money for sick and injured rockers, the hospital wing will include its own staff, plus voice-activated iPod shuffles. “It will still cost you $6,000 for a CT Scan, but Music for Airports should take your mind off of it,” said a spokesman.

“I can’t wait!” Harper says about his new concert series, Drop C, D & E. Each show will start at noon, run until midnight, and feature at least 16 bands playing 20-minute sets with 10-minute changeovers. Mom’s Music will handle backline. No act is confirmed yet, but a return trip from thrash metallers Overkill are said to be in the works. Loud music. Loud, loud music.