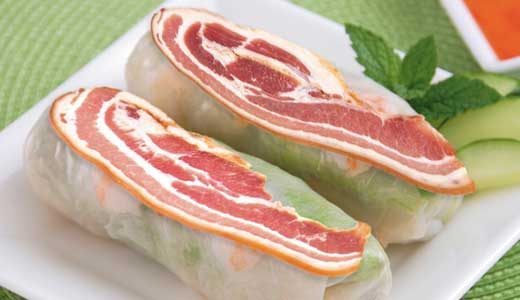 A spokesman for the Louisville chapter of the Kentucky Restaurant Association, in a surprise announcement, said last week that virtually all area restaurants are in the beginning stages of updating their menus to feature one key product: bacon.

“Why bacon?” said the KRA’s Bruce Muddschnaut. “That’s simple: Because it’s bacon. By this time next year, we expect all Louisville menus to be bacon-centric.”

It is believed the movement began with Papa John’s much-publicized Double Bacon Six Cheese Pizza. The pie, unveiled back in November, “definitely answers the call for anyone looking to ‘bring home the bacon,’” quipped Papa John’s chief marketing officer Andrew Varga in a press release. He noted that the average American eats 17.9 pounds of bacon annually.

“We thought that sounded low, so we hoped to up the average,” Varga said.

Even Zen Garden, Clifton’s staple vegetarian eatery, is making the change. “It’s a well-known fact that bacon is the ‘gateway meat,’” said owner Huong Tran. “I’m hooked, and it feels good to finally come out of the closet and say so publicly. And seriously, imagine how good our vegetable and bean curd soup will taste with salty, cured pig flesh added to it.”

He stopped to wipe some drool from his chin, then added, “Bacon-wrapped tofu, bitches.”

Former Louisville Mayor Jerry Abramson, apparently still not realizing he isn’t mayor, issued a press release about the bacon-izing of the local dining scene. The release was written in crayon.

“I applaud this move by local restaurant owners,” gushed Abramson. “I believe it will have a galvanizing effect on the city’s dining community and on the community as a whole, not to mention it’s a great tie-in to the stockyards and Louisville’s rich history of meat-packing.”

Some of the dishes expected to appear on menus around town include bacon and shrimp cocktail (Seviche), bacon chili wontons (The Bristol), “Steakon” (one-pound slab of pork belly at Ruth’s Chris), the Squealing Pig Roll (rice and seafood-wrapped bacon strips at Sapporo), and bacon-wrapped bacon with a side of bacon (Sweet Surrender).

Not all restaurateurs are quite so enthusiastic about the sweeping changes, however.

“This actually kind of sucks for us,” said Joe Frase, owner/chef of the Blind Pig, which has long featured menu items such as a bacon butty and bacon ice cream. “We thought we had a niche, and now what? Are we supposed to become a smoothie bar or something?”

Too many pubs, too few family members. Patrick O’Shea, who owns four Irish pubs throughout the city, announced Monday that his family recently adopted a child from Malawi and will soon be opening Nadifa O’Shea’s on Hurstbourne Parkway. O’Shea says the family has been looking to adopt for a few years and is relieved the process was smoother for him than it was for Madonna. “When my people first saw little Nadifa, we knew she was an O’Shea,” he says. “Her name means ‘born between two seas.’”

However, critics, including the owners of Molly Malone’s, say the adoption was a publicity stunt to open a new business and that the O’Sheas simply ran out of family members to name bars after. “So untrue,” O’Shea says. “In fact, I’m offended by that insinuation. Happy hour starts in 10.”