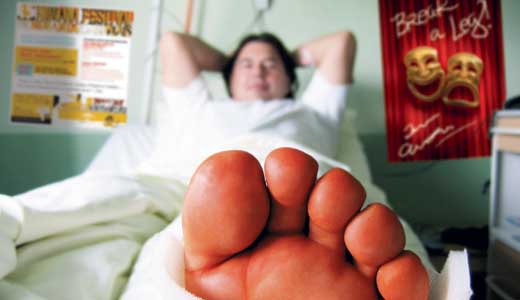 Just as the lights dimmed during Friday’s opening performance of “The End,” K. Thomas Welsh fell down the stairs at Actors Theatre as he was entering stage right. “I broke my left leg at the beginning of ‘The End,’” he said Tuesday at a press conference. Welsh’s agent said he’ll be out for at least six weeks, which terminates his contract with the Humana Festival of New American Plays.

Unfortunately, Welsh cannot afford health insurance, and his broken leg remains propped up and iced down. A cast would cost him $800. Welsh’s agent, Henry Bean, is hoping that since Welsh was technically working for the Humana Festival, that the health care company will help cover his medical costs. “It’s the right thing to do,” Bean said. “I mean, if you think about it, he’s kind of an employee of Humana. You would think they could spare a cast, or at least some morphine.”

As of presstime, the reps at Humana had not offered Welsh any monetary compensation for his injury. “I was just a guy looking for a lucky break,” said the rookie actor. “I didn’t know it would be so literal.”

A benefit party for Welsh will be held Saturday at the Monkey Wrench. Donations and Percocets are suggested.

Organizers of the first-ever Blue Cross Blue Shield Festival of New American Tweets announced the schedule for the literary event on Thursday. In a statement that was exactly 140 characters, the highly anticipated, all-local lineup was revealed to the public via Twitter: “The @BCBS Fest of NA Tweets will feature @pamsbutt, @justaddbourbon, @glitterslut, @loueyville, @502todo, @geekygirl502, @KYbourbongirl etc.” In a separate tweet came the event’s specifics: “April 12-13, The Bard’s Town, free, stay tuned for details!”

Organizers say the event will include Louisville’s top twaters who will read some of their most re-tweeted tweets.

“Tweeting is an art form,” @BCBSFOrganizer said. “We want to celebrate the best this city has to offer. Louisville jumped aboard the Twitter train when it was launched in 2006. This festival gives us a chance to celebrate creativity in 140 characters or less.”

Selected participant Pam Newman, who owns the screen name “pamsbutt” and tweets up to 10 times a day, is thrilled to be a part of this year’s Festival of New American Tweets. “I think long and hard every time I tweet,” she said. “It’s nice to be recognized for rapid-fire genius.”