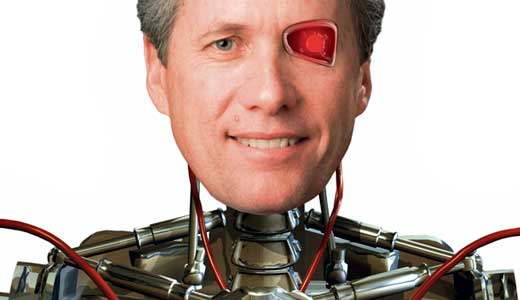 Ever since taking office in January, Mayor Greg Fischer has been badgering LEO Weekly to interview him. Pointing out that his predecessor made it on the cover on more than one occasion, the political newcomer lobbied the publication for the same opportunity.

After bumping another news story and rearranging a few things, LEO made room to accommodate a quick Q&A with Fischer in this week’s edition. We did our best to break through the blank stare and deadpan façade to find out what really makes Greg Fischer tick. We suspect there might be a high-tech lithium battery involved, but the interviewee would neither confirm nor deny the allegation.

LEO Weekly: Let’s start by discussing the claim that you are lacking somewhat in the personality department. How do you respond to that criticism?

Greg Fischer: I’m a businessman, and business can be construed as bland. But it’s not. Nor am I. I’m just all business. I plan to run this city as a business. That’s the catalyst behind “Mayor Greg Fischer’s Strategic Platforms,” a wordy document full of corporate buzzwords and phrases, like “data-driven initiatives” and “quantitative decision making” … excuse me, are you even listening?

LEO: What? Who, me? Of course. Maybe we should move on … While you were on the campaign trail last year, LEO Weekly uncovered credible evidence suggesting you are a well-engineered cyborg. At the time, a campaign spokesman declined to comment. So now we’re asking again: Are you a robot?

GF: Does not compute.

LEO: With Louisville facing a $22 million budget shortfall this fiscal year, do you plan on raising taxes, cutting services, or simply making a withdrawal from your personal bank account?

GF: Everything is on the table. But honestly, I’m more inclined to ask my father, George, for the money rather than squander my own fortune.

LEO: Speaking of money, journalists don’t make much. Can I have some of yours?

GF: Seriously? You just called me boring and accused me of being a robot? At least the The Courier-Journal has the good sense to write flattering things about me before seeking payment.

LEO: Metro Louisville recently dropped from the 16th-largest city to the 17th-largest “incorporated place in America.” Is this your fault?

LEO: What inspired you to invent the automatic ice and beverage dispenser?

GF: An affinity for Big Gulps.

LEO: Favorite inventor and why?

GF: Al Gore, because the Internet — like the automatic ice and beverage dispenser — has changed society for the better.

LEO: You do realize that Al Gore did not actually invent the Internet, don’t you?

GF: Well if he didn’t invent the Internet, then I’m not the brains behind the world’s greatest gadget in thirst-quenching history …

LEO: Isn’t it a riot that former independent mayoral candidate Jackie Green was gullible enough to believe you intended to create an Office of Sustainability — with his guidance — if he dropped out of the race and endorsed you? Shrewd move, Greg, shrewd move.

GF: Thanks, but I’m not that savvy. It was actually the idea of spokesman Chris Poynter and then-policy director Brandon Coan … crafty little boogers.

LEO: A new city law prohibits nudity, lap dances and drinking in strip clubs. Will you stop patronizing strip clubs as a result?

GF: I stopped making it rain when I married Alexandra. Trust me, you don’t want to piss off a Greek woman.

GF: Actually, no one knows this, but he’s still here. He refused to leave Metro Hall, just as LEO Weekly predicted last year. We finally set up a card table for him in the corner of my office; occasionally we let him answer the phone or make copies.

LEO: Did he by chance bestow upon you his teal and pink Derby sport coat, and if so, are you man enough to wear it?

GF: I’d be happy to, but again, Jerry is having trouble letting go. He’s worn it every day since the start of spring. It’s sad, really.

LEO: Speaking of Derby, do you plan on being a passenger on the Belle of Louisville during the upcoming steamboat race, and if so, did Abramson warn you that you’re likely to be accosted by LEO Weekly’s Bar Belle?

GF: Shortly after I was inaugurated, the Bar Belle was on a list of people I was warned to avoid. Let’s see, I’ve got that list right here — it includes Tyler Allen, damn authentic liberal; that perpetual pain-in-the-ass blogger Jake Payne; Hal Heiner — his bubbly personality makes me look like an asshole. Wait a minute … you’re on this list. How the hell did this happen? Somebody’s getting terminated over this. Where the hell is Brandon? …

Anyways, to answer your initial question: I should probably stay off the boat. I can’t get wet, or else my mainframe goes haywire.