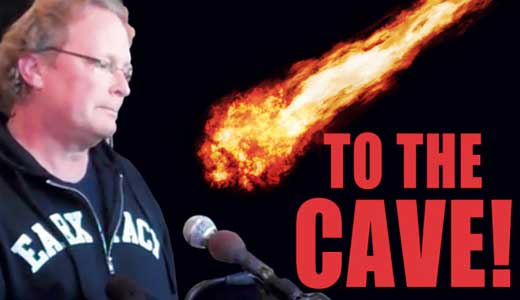 ear X-tacy owner and avowed conspiracy theorist John Timmons relocated his store to the Mega Cavern underneath the Louisville Zoo Tuesday based on hearing rumors of an impending asteroid attack.

While the last documented touchdown from a celestial baseball happened in Siberia in 1908, Timmons isn’t risking it. “I watch ABC’s Brian Ross, and he never lies.”

Timmons has produced another YouTube video, titled “Stop Rock, Then Roll,” urging customers to form a human shield in exchange for 50 percent off all tween-related inventory and an Oreo Dairy Queen Blizzard for Underground Sounds owner Craig Rich.

As expected, ear X-tacy’s Facebook comment thread ballooned in a fury of cathartic hash-tagging, ttyls and @ symbols. Remarks amounted to a kind of emotional diarrhea, equally positive and negative, as well as bizarre tangents on reptilian hieroglyphics, white-trash haiku, bed-head and sex tweeting. “I don’t even know what that means,” Timmons says.

Mega Cavern officials say tours will resume pretty much on a truncated schedule, and Timmons says ear X-tacy’s new location will allow him and his staff to explore new marketing opportunities. “Time to put that suggestion box to good use.”

He dismisses any plans to change the store name. “One of my employees suggested renaming us ‘X-tacy Cavern,’ but we figured Widespread Panic already had that copy written.”

“We’re not bees. We don’t see octagonally,” said an unnamed indie guitarist whose first name describes a double rainbow. “Much like the hip-hop community retired ‘Def,’ we’re hoping for an equally relevant funeral for buzz. That shit is so Adam Curry-era MTV.” New buzz band Black Wolf Fire took the opposite camp, saying it would have to rename itself. “We pretty much settled on this name after the three most common words used in indie music today.”

“No, man, let me show you,” employee Mark Renterino said as he snatched the gold PRS from a customer and proceeded to recreate Van Halen’s “Eruption” note-for-note. The customer exited the new Shelbyville Road location sobbing. “I knew I should’ve bought a KORG.”