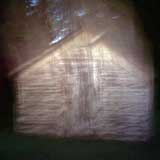 If you know these individualistic auteurs, who’ve left fingerprints all over the local musical genome, you’ll find much that’s familiar in this instrumental disc. Rizzo and Key collaborated a decade ago on Dark Edson Tiger, but this time around, it’s about close harmony between guitars, or occasionally of setting one guitar against an atmospheric layer of keyboard and rhythm. Starting with a lead-off track that suggests a stumbling fight against a hangover, they’re playing morning music that may be somewhat stylized, though not so rigidly as to come across as a mere exercise in avoiding sentimentality. No one breaks into a significant solo throughout the 11 primarily acoustic tracks, and the melodies are whispers woven among the stark yet casual arrangements. “Jagged Naught” shifts the sequence into a slightly higher gear at just the right moment to show that there’s indeed a master plan here, and though it isn’t misbegotten, Double Star is strictly for patient listeners.