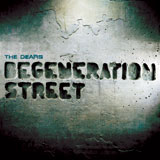 Can you blame Murray Lightburn for wanting to set a little Arcade Fire? After a decade with The Dears, he still seems to carry the whole band on his shoulders (even marrying band-mate Natalia Yanchak). Their band’s latest only really imitates their more successful Canadian neighbors a couple of times — and those serve to prop up sagging points in the sequencing (e.g., the second track). The Dears make their own way beautifully with songs like “Omega Dog,” which is glued together by a razor-thin swath of funk holds. Lightburn typically starts his lyrics by describing what has set him off, whereupon the band piles up sometimes discordant keyboard-and-guitar figures through which he sings of the feelings that might be able to see him through. The band, full of good musicians, mines the fertile ground of Bowie’s Berlin phase, and without forsaking tune-craft.