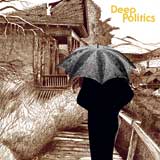 Not much has changed for Grails on Deep Politics, the Portland post-rock quartet’s ninth album. They still conjure up dense, otherworldly instrumental soundscapes, dabble with Middle Eastern tonalities, and deploy dramatic shifts in style and dynamics. There’s a shocking variety in the band’s scope and sonic reference points; they’ve ventured further outward into the realms of trip-hop ambience they hinted at on 2008’s Doomsdayer’s Holiday; here it’s more seamlessly incorporated into a hypnotic blend of prog-rock expansiveness, metal sludge and mystical folkiness. “All the Colours” is hellish, film-noir jazz with a discordant piano figure and apocalyptic mellotron — an unlikely (and completely excellent) mixture of The Bad Plus and early King Crimson. In the atmospheric “Future Primitive,” a Middle Eastern string part coils like a hungry snake around midnight black distortion. Light some incense and put on the black light. Deep Politics is a heady black hole of an album you’ll have a tough time pulling yourself out of.