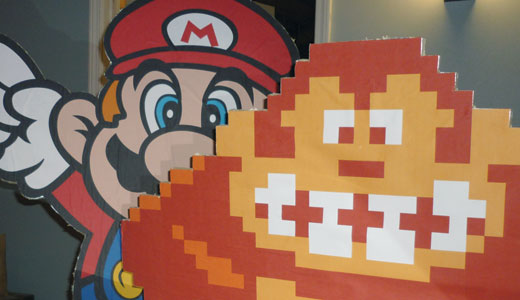 Retro games have made a big comeback thanks to emulators and downloads, but much of the action and community was lost when it became cheaper to bring the arcade to your living room. Anyone who grew up with a console remembers kicking and screaming in Toys “R” Us while being dragged away from the plastic-cased Sega Genesis or Super Nintendo — or even the rare and endangered (even in its time) Sega Saturn — because five more minutes was never enough. Remember standing around in Aladdin’s Castle or Pandemonium, blasting the hell out of some zombies and entering your initials on the high-score board. Have you gotten even close to the same kick playing “Galaga” on your 360? Didn’t think so. When you don’t physically go to a place and interact with these machines as they were meant to function, you lose a large chunk of the nostalgia — and enjoyment.

Well, the Louisville Arcade Expo has just sprung up to fill that need. In the spirit of both the arcade and the glass-cased, free-play console, Joe Stith, a member of ArcadeRx, the group behind this event, has set up a nostalgia buffet for the kid in all of us. Every game system you ever wanted but couldn’t have, every arcade machine you never see any more — all of it will be available and set up for free play this weekend. From hundreds of pinball machines to Atari, NES, Jaguar, Sega, Apple II and Commodore 64 computers, everything you can imagine from the ’70s, ’80s and ’90s, along with a whole truckload of stuff you never knew existed, like the 32x, the Virtual Boy and the 3D0.

“The event’s focus is ‘by nerds, for nerds,’” says Stith, so no need to feel self-conscious. The retro gaming community has become a full-fledged force, and you would be surprised how many are out there, especially in Louisville. “Our city is great at being a melting pot of different happenings with our music scene — the IdeaFestival that’s held here, the Derby Festival — so why not add retro gaming to that list as well?”

As automatically awesome as a retro-gaming convention already is, I haven’t even mentioned the booster shot of greatness that puts this one over the top: tournaments. Whatever old game it is you claim to be an unbeatable force in, there will be a tournament for it, with real trophies and special prizes (arcade machines, pinball machines) for the winners. You can kick ass in front of a crowd in “Duck Hunt,” “Super Mario Bros.,” “Street Fighter 2,” “Super Mario Kart” or on a refurbished pinball machine. Who doesn’t want to bring home a golden light-gun zapper trophy to put up on the mantel? You can point up to that thing and tell the grandkids, “I was the state champion in ‘Duck Hunt.’”

“Our primary goal is to give everyone here a chance to relive the awesome fun you used to have in arcades and playing game systems from the ’70s, ’80s and ’90s — back then, games were games,” says Stith. If you feel the same, help make it into a yearly event by showing up, kicking ass, ogling systems and letting your nerd flag fly in public.