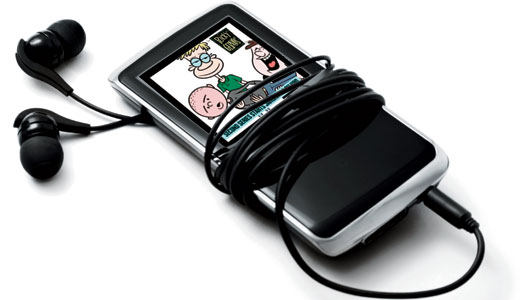 Favorite comedy podcasts among LEO readers, according to my highly non-scientific survey of the demographic, are “WTF,” hosted by Marc Maron, and “The Nerdist,” hosted by Chris Hardwick. Both are smart shows that go well beyond the usual blither-blather by virtue of lengthy, intimate interviews with comedians and other media stars.

Maron is one of those overlooked comedians who never made it as a stand-up but might still make it before he reaches retirement age simply because word of mouth has brought him a huge fan base in the podosphere. His sessions with Ira Glass and Robin Williams are legendary.

Hardwick, who addresses his listeners as “nerdizens,” is younger, hipper and more energetic than Maron. He also is from — ta-da! — Louisville. But he co-hosts “The Nerdist” in L.A. where, in addition, he presents the show “Web Soup” on the cable station G4. “The Nerdist” was chosen by the Onion’s AV Club as one of the best podcasts of 2010.

These guys are good — sharp and on top of all the stuff that makes life matter. But there’s an element of in-crowd exclusion to their podcasts. At some point, the general listener feels compelled to ask, “Who is the real audience here?” And it almost always feels like the answer is: other comedians.

And then there’s “The Ricky Gervais Show.” More widely known as the creator of “The Office” and “Extras,” Gervais, too, got his start as a stand-up, but when you listen to the podcast, you hear almost immediately why he has had the extreme commercial success that eludes other wits.

Note I say listen. That’s in contrast to watching the animated version of the show on HBO. The addition of animation is decidedly unfunny. I would go so far as to say it’s bizarre that anyone agreed to it as a marketing concept, because the visuals practically ruin what may be the most dead brilliant remake ever of “The Three Stooges.”

Like many other podcasts, Gervais’ show involves three guys sitting around with microphones, gassing it up about various subjects. Only here, the subject is not, How are things going in the world of comedy? The subject is the world itself. Gervais and his writing partner, Steve Merchant, get things fired up by tossing around concepts for their “stooge” Karl Pilkington to comment on. What will make you laugh out loud (to the point of embarrassment) is Karl’s deadpan delivery, in his heavy Mancunian accent, of his opinions. Then there’s the way Gervais comes back with, “Karl, you’re a fucking idiot!” It’s plain to hear that he does not find Karl an idiot at all but reveres him. Basically, Karl is saying what we’re all thinking.

A case in point is his response to the notion of charity giving for the holidays. Karl is befuddled that anyone would send a goat to a family in Africa and present this as a Christmas gift to a loved one back in England. “Let me put myself in their shoes. Say, I’m one of them, right, over there. I’m hungry, right? I’m there, it’s Christmas day, right? I open it up, open the present, little goat there. Right? Now, if I was one of them, I’d be going, ‘Not another mouth to feed.’ At the end of the day, there’s not enough food to go around for themselves, never mind the goat.”

But you’ve got to hear Karl say it and hear the responses of the other two. They make it seem random, yet it’s ingeniously orchestrated. Give HBO a miss and go directly to iTunes, where you can download it all for free.