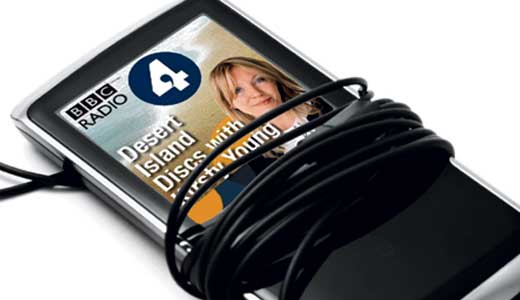 In Howard Jacobson’s novel, “The Finkler Question,” which won last year’s Booker Prize, the title character makes an appearance on BBC Radio 4’s “Desert Island Discs” and subsequently gets in big trouble with his wife for certain facts he reveals on the show about their life together.

In a case of verisimilitude just waiting to happen, Howard Jacobson himself was asked to be a guest on “Desert Island Discs” just a few weeks after he won the esteemed award.

OK, maybe it wasn’t verisimilitude. It’s just as likely that Jacobson added the scene to his novel so he’d be invited onto “DID” himself. In any case, the author went on the show, and, predictably enough if you know his sensibility, he chose a combination of impeccably high-end classical pieces (Bach, Schubert, Mozart) and songs from schlocky crooners (Mario Lanza, Al Bowlly). Jacobson’s novels move in a similar fashion — from the lyrical to the ridiculously slapstick.

And, of course, the show’s host, Kirsty Young, asked Jacobson if he was going to be castigated by his wife for revealing what he revealed during their hour together, or if he thought everything would be all right. His reply: “God, I hope so.”

Conceived in 1942, “Desert Island Discs” is the longest-running BBC radio show. In fact, it’s the second-longest-running radio show in the world, beaten only by The Grand Ole Opry. There are good reasons for its perennial popularity.

The format is simple: Each guest, or “castaway,” is asked to choose eight pieces of music, a book and a luxury item for their imaginary stay on a desert island. In between selected songs, the guest discusses his or her life and how various parts of it pertain to the music selections at hand.

Not only is Young’s low-pitched, slightly Scottish voice both throaty and comforting, but she asks good, pointed questions that keep the guests focused on the conversation. It’s kind of like reading a condensed memoir, accompanied by music.

Even given all of that, though, what’s most outstanding about “DID” is the anticipation of what each castaway is going to choose — anticipation that might be met with a sublime song you’ve never heard, sending you pronto to download some new music; with horror at unexpectedly ghastly taste; or with wacky surprises that make you ask, “That is actually a song?”— as when a poet chose Andy Stewart’s “Donald, Where’s Your Troosers?” (I dare you to YouTube it.)

There was a bit of a brouhaha when Young took over the host job in 2006. Oldsters thought she was too young and good-looking to have the chops they’d counted on in more stodgy hosts over the decades. But Young’s got the chops and then some. She will present a series of updated hour-long episodes on Radio 4 Extra when the digital station, currently known as Radio 7, is relaunched in April.