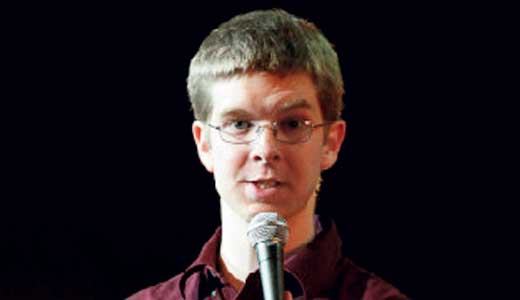 Jacob Williams, at just 22 years old, is one of the fastest-rising comics on the local scene. The Louisville native and current Beloit College student is a finalist in The Improv’s Comedy Derby, was voted best local comic by LEO readers in 2010, and recently won a spot on the Showtime comedy special “Pauly Shore’s Vegas Is My Oyster,” where he performed alongside some of today’s comedy heavyweights. Williams will perform this weekend at the Comedy Caravan with Brad Tasell.

LEO: Tell me about the “Pauly Shore’s Vegas Is My Oyster” contest.
Jacob Williams: I saw the ad on Facebook. He was asking people to submit stand-up comedy clips. I had one ready, so I thought, “All right, I guess I’ll do it.” I wasn’t expecting anything to happen, but then they called me.

LEO: What was the actual prize?
JW: They flew me and my friend out to Vegas for two nights; they picked us up at the airport with a limo, which I didn’t expect; we got to stay in The Palms resort and perform on the Showtime special with Pauly Shore, Andy Dick and Tom Green. And the woman that ended Sandra Bullock’s marriage was on the show. I think it airs in the spring.

LEO: That’s a strange group of people. How crazy did things get?
JW: That’s a good question … I’m trying to figure out what I can or can’t talk about.

LEO: Don’t worry, we’ll run anything …
JW: That’s what I’m worried about. It was kind of surreal — we were hanging out in this exclusive Playboy nightclub, sitting V.I.P. next to Pauly Shore and tons of women who were trying to get his attention. And there was one part of the show where Bobby Lee started crawling through the audience naked. And the band Semi Precious Weapons played a set — they had almost completely naked women all over their stage.

LEO: With Andy Dick there, things had to have gone down.
JW: You know, he has a reputation for being all in your face and stuff — I feel like that’s probably an act. You can’t have a successful career in show business if literally every time you met a new person you were groping them or something.

LEO: The one time I saw Andy Dick, he pulled his penis out on stage, told the audience to go fuck themselves, and walked off after 10 minutes.
JW: Oh, wow.

LEO: How have some of the other local comics responded to all of this?
JW: Everyone has been so nice, incredibly supportive. I’m always afraid when I get something that I’m going to be alienating some of my peers. But I was surprised how many people were so nice and genuinely excited for me. Because I think, generally, comics tend to be bitter, and I know how it feels to be jealous of someone when something good happens. But everyone I’ve talked to has been really nice about it and very supportive. That’s the nice thing about the Louisville scene.

LEO: How do you finish off school while being on the road so much?
JW: Yeah … I don’t know what’s going to happen there. I have a couple of showcases coming up at prominent clubs, where I’ll have to delay some of them or negotiate with my school. So it will be interesting.