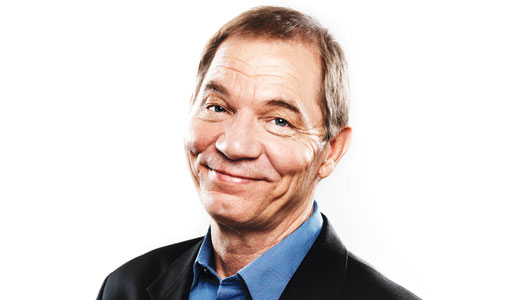 Comedian Mack Dryden says that almost every time he tells a local he moved from L.A. to Louisville, he gets the same reaction: “They say, ‘Wow, that must be some kind of culture shock,’ as if L.A. has all the culture and Louisville has none. That’s ridiculous,” he says in his slight Southern accent. “Louisville has plenty of culture. I mean, the corn-hole tournaments alone …”

The line gets a crackling response at the Comedy Caravan, where he’s worked several times since he and his wife landed in their “new” (1930) home in the Highlands in December. So why would a guy who’s performed on “The Tonight Show” with both Johnny and Jay and who wrote for “Politically Incorrect with Bill Maher” leave the entertainment capital of the world for an artsy little city in a fly-over state? “Because we could,” he says with a satisfied grin. “Our showbiz friends are jealous we escaped. I’ll get a smarmy e-mail from somebody saying, ‘It’s 78 and sunny here,’ and I’ll write back, ‘Yeah, but you’re still in L.A. with 10 million people who’d run over you to get to the exit ramp first.’”

He says the traffic nightmare was one reason for the move. “I got home after a nasty drive across town one day and realized I had a sunburned finger.”

Dryden was “the Southern half” of a successful comedy team who made dozens of TV appearances and hosted their own syndicated show, “Comedy Break with Mack & Jamie.” As an actor, he’s been cast in many guest-starring roles in shows ranging from “JAG” to “The Guardian,” and he was a series regular on an ABC Western called “Paradise” in the early ’90s.

He and his wife were still unpacking boxes when he contacted Gilda’s Club to donate his services. They quickly booked him for a performance next Wednesday. He makes a living speaking to corporations and associations all over the country, but he also bills himself as the funniest two-time cancer survivor in the country and performs at dozens of cancer survival celebrations every year. “There’s no bigger thrill for me than seeing hundreds of people touched by cancer bent over laughing,” he says. “These people need some nourishment for the soul, and I think I provide that. Laughter might not cure cancer, but it makes people happy to be alive in that moment.”

So how do you make cancer funny? “Cancer’s not funny,” he says. “People are funny, and since they keep discovering new health benefits of laughter every day, I figured I’d be the dumbest comedian in the world if I didn’t get as many laughs out of my ordeals as possible. My doctor asked me if I wanted him to implant a plastic prosthesis so I’d look the same after my testicle was removed. I said, ‘Why, doc? Don’t you think my friends will recognize me?’”

After beating testicular cancer, he developed malignant melanoma on the back of his eyeball, a rare condition. “I’m having no luck at all with these round organs,” he quips. After losing vision in his right eye, he said, “I’m doing pretty well for a guy who’s half blind and half nuts.”

So why Louisville? “I’m from Mississippi, my wife’s from a small town in Maryland. We both went to L.A. for showbiz, but it never really felt like home. Then my wife’s sister moved here about seven years ago, and every time we visited her, we kept finding more reasons to love this place. It’s the best-kept secret in the country.”