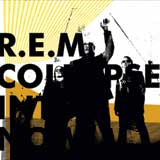 Free from the pressure to reinvent themselves each time around, R.E.M. solidifies their remarkable comeback with an album that’s subtle and shaded where its predecessor, 2008’s hungry Accelerate, swung for the fences. In that sense, Collapse better evokes R.E.M.’s classic era, incorporating anthemic choruses, haunted ballads and odd left turns, but it’s also less consciously classicist — even if “Blue” is a fairly obvious rewrite of “Country Feedback.” It’s R.E.M. comfort food, which doesn’t mean that they’re coasting — in fact, there are a handful of instant classics here, with “Uberlin,” the furious “All the Best,” and the aching “Me, Marlon Brando, Marlon Brando and I” emerging as particular highlights. Accelerate was a triumphant return to form, but Collapse is ultimately the stronger album, and with its Warner Bros. contract expiring, it stands as an excellent distillation of R.E.M.’s tenure with the label.