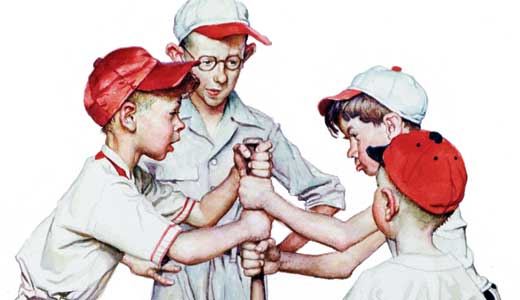 The Louisville Slugger Museum has always been primarily about baseball, but the “Norman Rockwell: Sports” exhibit, which opens Saturday, takes the Louisville mainstay a step further.

“Exhibiting original works by an artist of his caliber means we’ll attract a new audience: people who may not think they’re interested in a sports-themed museum like ours,” says Anne Jewell, executive director of the Louisville Slugger Museum.

The exhibit features 25 original Rockwell works, ranging from oil paintings to doodles, along with 30 sports-themed Saturday Evening Post covers and personal items such as paint brushes, props, his bicycle and more. The collection is on loan from the Norman Rockwell Museum in Stockbridge, Mass.

Landing work by an artist of Rockwell’s importance is also a coup for the city, Jewell says, and the hope is that it will lead to some positive publicity not just for the museum, but for Louisville as a whole.

The exhibit will mark the first time Rockwell’s work has been presented specifically from a sports perspective; Rockwell’s pieces are slice-of-life Americana, and “Normal Rockwell: Sports” focuses on Rockwell’s — and America’s — fascination with sports of all kinds, from boxing to football.

Rockwell’s particular fascination with baseball provided us with a number of his better-known paintings, a fact that obviously plays into the museum’s focus. “We are dedicated to education and art appreciation inspired by the legacy of Norman Rockwell,” says Norman Rockwell Museum curator Corry Kanzenberg, via a press release. “Rockwell’s illustrations of America’s athletic pastimes are among his most well-known works of art, and Louisville Slugger Museum is the perfect venue to debut this exhibition.”

Rockwell’s portrayal of baseball back in the sport’s heyday “was definitely part of the original inspiration for creating this exhibition,” Jewell says. “But the show has lots more beyond baseball. There’s a good bit of football, along with other sports ranging from fencing to golf and cheerleading.”

Jewell admits she is a fan of one non-baseball component of the show in particular — an oil painting that focuses on boxing, a sport that obviously holds some measure of interest for Louisvillians. The piece “took my breath away the first time I saw it at the Norman Rockwell Museum in Massachusetts,” Jewell says. “If I could still do a cartwheel, I would’ve done one when I learned they were going to loan us that piece.”