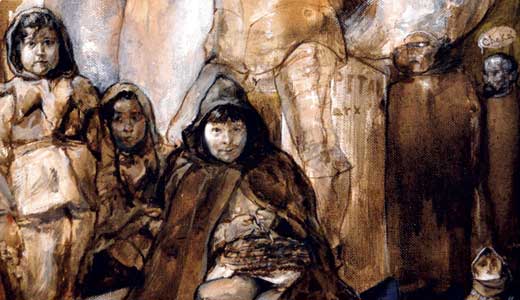 Cuba is a country that’s quite foreign to most of us. That’s not our fault; blame decades of communist rule and the embargo. Now, thanks in part to the Obama administration, Cuban-American relations are improving.

Cuban artist Carlos Gamez de Francisco is one of the beneficiaries of this easing of restrictions. Born in Holguín, Cuba, he has lived in Louisville for two years and has been able to travel back to Cuba four times during that period. “I think it used to be once every three years, then once a year. Now I can go as much as I want,” he says. “Cuba says I can stay only for three months, then I have to come back to the U.S. After one day in the U.S., I can go back.”

During his visit to Holguín in the summer of 2010, he got the idea of bringing back contemporary Cuban art to exhibit in Louisville. The result is the “Cuban Art Show” at Graciela Perrone Art Gallery.

Gamez de Francisco bought 50 paintings and prints, plus one photograph, from Cuba, and has hung about half on the walls in the gallery. He’s considering switching them with the remaining half soon. Many are being shown in America for the first time.

“Some of the works are the best from (Holguín), including the second and third best artists in the city (Harry Ruiz and Miguel Angel Salvo).” He explains that the best artist, Cosme Proenza, is world-renowned and too expensive for him to include in the show.

Gamez de Francisco studied with all three and was greatly influenced by Ruiz. “Obrero del Arte” by Ruiz and Salvo’s “Lamentation at the Tomb” are featured in the exhibition.

A number of traditional Cuban subjects are featured. Landscapes are popular in Cuba, especially scenes of tobacco fields. Other common themes are images of roosters and farmers. “The Big Night Out” by Mario Suarez has it all: farmer’s hat, rooster, tobacco and the obligatory nude woman. “When you go to Paris, you get the Eiffel Tower. When you go to Cuba, (you get this).”

Born in Montevideo, Uruguay, she moved here in 1995 when her husband was working in Louisville on a short-term project. “We moved for just for three months,” she says, laughing. “We’ve been here now around 15 years.”

At the beginning of her time in Louisville, Perrone says she “needed to do things.” That included studying flamenco with Mara Maldonado and eventually joining her company Ballet Español. She recorded the CD Graciela, one of whose songs was used in Stu Pollard’s Louisville-centric film “Keep Your Distance.”

“I’m very passionate about what I do,” Perrone says. “This city makes you more attached to ‘you.’ It let me be all things I wanted to be.”

Now it’s time for her painting (two of her works are in the show). “I love flamenco and singing, but I want to focus on my painting more and more. I feel when I paint, there’s more going on. I want people to stand in front of my paintings and connect. I’m amazed at people looking at my art, someone else reacting to my work. What is art if you don’t connect?”