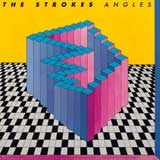 Sometimes an “experimental” album’s gestalt can be stronger than the sum of its parts (see: Radiohead’s Kid A); sometimes individual songs can unify an uneven set and be iconic (see: R.E.M.’s Out of Time). In an effort to reinvent themselves, The Strokes created an album lacking both. Opener “Machu Picchu” interestingly sets a Duran Duran dance groove, but “Two Kinds of Happiness” is a mess, and the wheels come off the whole album. A few tracks, such as “Taken for a Fool,” the BTO-tinged “Gratisfaction” and “Metabolism,” are solid Strokes in spite of the spiritless grind. But too often the songs implode under mid-song tempo changes (“Call Me Back”), excessive guitar noodling (“Under Cover of Darkness”), and flat out pointlessness. I haven’t heard a more confused and confounding set this year.