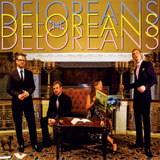 At their best, The Deloreans fuse infectious power pop, kitchen sink arrangements and the bravura of Roy Orbison’s Monument singles into an intoxicating brew. At their worst, their pretensions become insufferable, as undercooked melodies buckle under the weight of Jeremy Perry’s scenery-devouring vocals. Both extremes can be found in abundance throughout American Craze; each keeps the other from dominating the album, resulting in a frustrating but fascinating listen. For every self-parodic misstep like the overblown “Dear” (which actually contains the line “I would want it to be so grandiose for you”), there’s a triumph like the glorious, heart-stopping “Buffalo.” Splitting the difference are the preposterous opener “Gatsby” and its instrumental cousin “Thanks Y’all,” likable curios that conjure an otherworldly easy-listening atmosphere reminiscent of Joe Meek. Flawed as it may be, it’s damn near impossible to turn away from American Craze. The Deloreans’ record release show is Friday at Zanzabar (2100 S. Preston St.).