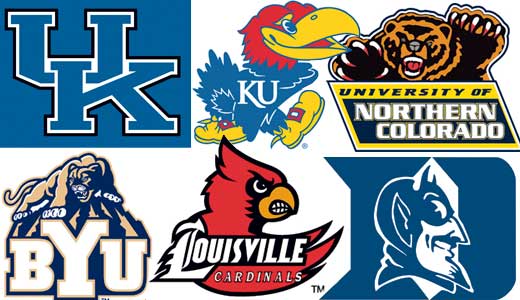 Steve Fisher’s San Diego State squad is the surprise of the season. Fisher is famous for mentoring Bill Frieder’s Michigan Wolverines to an NCAA title. Infamous for recruiting the Fab Five, who won lots of pub, but zero titles. The Kawhi Leonard-led Aztecs are legitimately tough.

Belmont Bruins. Until last week, the school was off the radar. Now the 30-4 Atlantic Sun champs, a No. 13 seed, are many wags’ flavor of the week. Slow-moving Wisconsin best beware. These Bruins run and gun, winning by 18-plus points per game.

Duke. Always Duke. Nobody else but Duke. Duke, the school everybody except its alums loves to hate. (OK, my wife loves Duke, even has a Duke ballcap.) Duke. Rhymes with, oh you know. The Blue Devils are defending champs, and have yet another easy road through the West. Feh.

And his sidekick, JaJuan Johnson. They’re the Purdue duo that stokes the Boilermakers. Matt Painter’s surprisingly successful team wasn’t supposed to be much when Robbie Hummel went down for an entire second campaign in a row. Instead, this gang is poised to make some noise in the Southwest.

If the tournament is the greatest show in sports — and it is — winning through to the last weekend of the season is like hangin’ out with Jagger, Brangelina and Scarlett at Studio 54. One guy’s picks: Ohio State, Kansas, Florida and Missouri.

How long has this little school from the great Northwest been the “darling” of the postseason, only to underperform while others grabbed Cinderella’s slipper? Too long. The Zags are back, but everybody’s talking about first round foe St. John’s.

Technically a misnomer, referring to schools known by their acronyms. Once upon a time there was just UCLA. This year’s field includes nine others: UAB, LIU, UNLV, USC, VCU, UALR, UTSA, BYU and UNCA.

Larry Bird no longer leads the Sycamores. But, after losing five in a row, these feisty Hoosiers won eight of their last nine and upset the applecart during Arch Madness — great name, eh?: — in St. Louis at the Missouri Valley tourney.

Louisville fans know a frosh center can lead a team to the throne room. It happened twice for U of L. Can this Ohio State wünderkind do the same?

The NCAA now suffers Super Bowl Syndrome. The greatest show in sports needs no official band. KOL are great, but this is not the Dance for them to play.

The Northeast Conference champ wins the name game. Jamal Olasewere tallied 31 in the league title tilt. It’s the only school in the land nicknamed Blackbirds. Plus, former coach Clair Bee invented the 1-3-1 zone. And wrote the Chip Hilton books.

The Eagles, Louisville’s first round opponent, won 12 of its last 13. Star Kenneth Faried has the second-most double doubles in NCAA history. He can rebound like Rodman. Fortunately he hasn’t entered a press conference in a dress and makeup. Yet.

Anybody who’s heard of the Big Sky champs, raise your hand? That’s what I thought. Hear me now and believe me later, the only-four-years-in-Division 1-first-time-in-the-Dance Bears can shoot the trey. They’re 40.1 percent from beyond the arc.

From the overlooked Colonial Conference, the Monarchs hold the best rebound differential in the land. They give up only 58 points a game, and, like somebody else we know, improved after a throwaway loss to Drexel.

St. Peter’s College, the MAAC tourney champ, if holding little chance of advancing in its first appearance since ’95, sports the dandiest nickname.

She’s the milquetoast from accounting, who eats homemade egg salad every day for lunch at her desk. Mythos is she wins the office pool every year. Actually most times, it’s won by that obnoxious sales manager. We block it out because he loves that team we hate.

Hearing college hoops most distinctive cheer means Kansas’ enormous traveling nation is in the house. We should be hearing it a lot, as Bill Self’s Kansas contingent powers its way to — in one guy’s opinion — the national title.

The hierarchal grouping of teams into inexplicable lines of four, purportedly based on each school’s performance during the season. The actual determinative formula used is locked in a Nicholas Cage-proof vault between the country’s gold supply and the recipe for Coke™.

With the new four network contract, every single tourney tilt will be televised in its entirety. Plus Ernie Johnson, Kenny Smith and Sir Charles Barkley in the studio, as antidotes to Seth Davis and Greg Anthony. Eat that, Billy Packer.

Not many WAC games make it on prime time TV. Well, these guys are 30-3. A week from today, we’re all going to be buzzing about some squad we haven’t previously considered. It could be the Aggies.

NIT bound again. What would Selection Sunday be without a shot of forlorn Seth Greenberg? The Hokie coach must have a deal with Double Bubble.

After his transcendent performance in the Big East tournament, leading UConn to the title, is there any question he’s they guy you’d choose to have the ball with a game on the line?

When we do this NCAA tourney from A to Z thing, X is always Xavier. Because, you know, not a lot of stuff starts with an X. Besides that, coach Chris Mack has the always tough, Tu Holloway-led Musketeers in gear again.

The most talked about squad of the year. Thank you, Jimmer. Thank you sex “scandal.” They were a legit contender. Then leading rebounder Brandon Davies schtupped his GF. Such a bad boy. It’s a school no-no. Now he’s on the bench wearing a scarlet letter. Thus Cougar title chances went soft.

All of a sudden, the guys in the striped shirts have faces teams have never seen before. Players don’t know the quirks of refs from other leagues. Caveat emptor, Big East schools — quicker whistles than you’re used to.