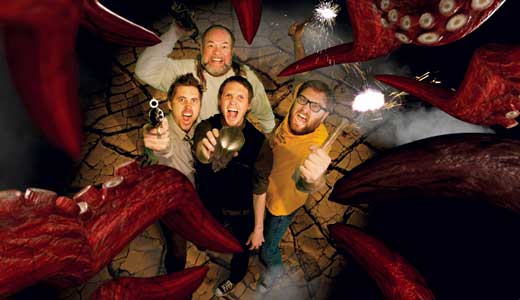 We generally like anything having to do with the madness-drenched writings of H.P. Lovecraft — but we abso-freakin’-lutely loved this damn thing! A trio of slackers, including the last living descendant of H.P., go on a reluctant quest to save an icky relic from the clutches of slimy monsters who will use it to reawaken The Old Ones. Our reality appears doomed until they get help from a salty sea captain and his fish-boy son. Inspired entertainment on a grand scale (with a less-than-grand budget). Our highest recommendation.

A long-overdue Blu-ray release of one of the most controversial films in history. Bernardo Bertolucci sends grieving widower Marlon Brando out on the ultimate bender. He is rescued by the waif-like sensuality of lovely Maria Schneider. But their frank sexual couplings — including the now-infamous “butt-hump on the kitchen floor” scene, which sent all of Europe into an oleomargarine frenzy — are brutal and one-sided, with Brando otherwise detached from reality. What does it all mean? One of the world’s great movies.

A demented producer wants to uncover, then film, the dirtiest jokes ever told in hopes of finding the one, true Dirtiest Joke Ever Told. In an obvious swipe at the shallowness of the movie industry, he hires the greatest cast, the greatest writers and the greatest crew in film history. Along the way, of course, you get to hear every dirty joke ever written. As crude, puerile and entertaining as it sounds.

A good, solid Limey drama about “Appeasement”: that era when England — and particularly the upper class — co-operated with Hitler rather than risk the loss of their posh lifestyle. Suffers from a lack of focus — parts of it are cheezy horror-film stuff, others suggest an action movie — but with stars like steely Romola Garai, the great Bill Nighy and one of the finest and most underused actors of our age, Julie Christie, how can you go wrong?

The original “Hatchet,” a seemingly run-of-the-mill indie slasher flick, was such a hit that the filmmakers decided to up the star content before setting out once again to make mincemeat out of genre-movie conventions. Stars Tony Todd, lovely Danielle Harris and Kane “Jason” Hodder as Victor Crowley.

A nice, original little indie spooker about a box that holds someone’s final breath — that which the Roman’s believed contained the dying person’s soul. It falls into the hands of two desperate men, each hoping to use it for their own purposes.

We had never heard of this Limey series about a lone cop who fights culturally inbred crime and corruption in remote parts of Ireland, but it’s quickly become a house favorite. Owen McDonnell co-stars behind the windswept moors and moss-covered cottages of Eire’s wild west coast. Three excellent full-length crime dramas per set.

A terrific film by the incomparable Orson Welles with an interesting back story. The movie, about hunting war criminals in a sleepy New England town, is a simple film noir, but Wells had such a reputation for going over budget that he compromised on a lot of things in order to reconcile with the studio. For example, he allowed them to replace his Nazi hunter, Agnes Moorehead, with E.G. Robinson. Just imagine Moorehead — a woman — as the ruthless manhunter and everything changes. Still, a great flick, now on Blu-ray.

THE UNTOLD SECRETS OF THE CIVIL WAR

This six-disc set from Reader’s Digest Films is hardly an insightful, in-depth doc on that fascinating period in American history. But what it lacks in production values it more than makes up for in wonderfully wacky trivia and perspective. Filled with true tales of skulduggery, best-forgotten romantic liaisons and sometimes-mythical superweapons.

Director Tony Scott imbues this simple idea — the sort-of true tale of a runaway freight train and the men who must stop it — with far more substance and originality than its simple origins would suggest. Two of Scott’s best ideas: hiring Denzel Washington and Chris Pine as leads, and stealing slightly from a 1985 Akira Kurosawa script. At the end of the day, it’s still a small movie, and quite brainless, but entertaining.

Yes, this is the doc that everyone’s been talking about: Davis Guggenheim’s unflinching look at America’s failed educational system. Focusing on Geoffrey Canada, founder of the Harlem Children’s Zone, the camera shows that all it would take to solve the problem is an army of dedicated, self-sacrificing teachers and parents who give a damn. Not to be missed, even if you don’t have kids.

WILLIAM S. BURROUGHS: A MAN WITHIN

A great doc on Burroughs, the Harvard-educated heir to a once-great adding-machine fortune, who became the personification of the Beat generation with such works as “The Naked Lunch,” “Queer” and “Junkie.”

YOU WILL MEET A TALL DARK STRANGER

A light and winsome comedy as only Woody Allen can do it. Anthony Hopkins waves bye-bye to long-suffering wife Gemma Jones to hook up with a young prostitute, Lucy Punch. Meanwhile, his daughter, Naomi Watts, gets the hots for boss Antonio Banderas, while husband Josh Brolin lusts after neighbor Freida Pinto. It is any good? Hey, it’s Woody Allen; what more could you want to know?