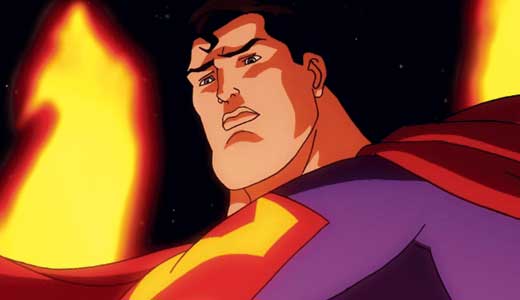 From the people who brought you “Tokyo Gore Police” comes this simply hilarious, blood-drenched horro-comedy about a clan of ninjas in feudal Japan who battle savage, man-eating alien creatures to save Earth from destruction. Possibly the best movie of its type since “Army of Darkness” — high praise indeed!

One of the more original animated Superman outings of recent years finds the Man of Steel dying from solar radiation at the hands of Lex Luthor. And in his last few days of life, he hopes to live out some fantasies, including revealing his true identity. But there’s little time for such indulgence as Luthor unleashes powers that could end all life on Earth.

If you’ve never seen a film by the remarkable James Nguyen, this is your chance. Young couple Whitney Moore and Alan Bagh go away for a romantic weekend, only to find themselves in Hitchcock territory as they are attacked by millions of murderous birds. And, in a nice touch, Tippi Hedren from “The Birds” makes a cameo appearance (sort of). Sounds like SyFy fodder? Bite your tongue! Excellent film.

An uncut release of Miller’s eighth HBO stand-up special. No word yet on whether they ever plan to release episodes of “Dennis Miller Live,” the Emmy-winning talk show he did for HBO from 1993-2002, to DVD. We’ll keep waiting.

About as generic as a movie can get, yet it remains somehow original, thanks in no small part to the inherent smarmy likeability of Robert Downey Jr. and over-the-top stupidity of Zach Galifianakis. Plot? Oh, something about Downey trying to get home for the birth of his child, but the only transportation available is with Galifianakis. But that’s just a pretense for all manner of mayhem. Nothing new under the sun, but makes a good date flick.

EDDIE GRIFFIN: YOU CAN TELL EM I SAID IT

Eddie Griffin may be the most underappreciated comic working today, largely because movie execs keep trying to turn him into the “next Richard Pryor” or some other nonsense. But here you can see him doing his own thing: riffing on Viagra, cracking on Michelle Obama, or what-the-hell-ever else pops into his head. Best of all, this is completely uncut, free of all Comedy Censored, er, Central, interference.

This brilliant Limey look at life centers on 15-year-old Mia — an amazing performance by Katie Jarvis — trying to survive adolescence with her mother and sister in a run-down part of town. With her own budding sexuality scrambling her brain, how can she cope with mom’s dangerous new boyfriend, Michael Fassbender? On Criterion Blu-ray.

One of those always-entertaining vanity projects Robert Duvall is so fond of; this one’s about a famous hermit who throws himself a funeral party — while still alive — in 1930s Tennessee, just so he can hear all the tall tales people have concocted about him. Duvall, of course, plays the hermit, assisted by Bill Murray, Sissy Spacek, Lucas Black and Gerald McRaney.

The weirdest flick of the week. Billy Boyd, Dominic Gould and Gérard Depardieu star in this tale of two famous pianists, lifelong rivals whose lives have intertwined. But the movie is not really about them — it’s about a domestic android named GLENN who puts the men and their families in jeopardy. Originally titled “GLENN 3948.”

An autobiography of William E. Jones in three parts, each examining his own life, the life of his titular Ohio hometown, and the associated gay political history of the time.

What does a nefarious supervillain do when there’s no pearly-toothed superhero to give his evil life meaning? That’s the question behind this CGI kidflick, with Will Ferrell as the big-headed blue baddie of the title and Brad Pitt as his former fearless foe. Jonah Hill steps into the void as a young hero-in-the-making, and both he and Ferrell fall for Tina Fey. Kinda in the same vein as “Despicable Me”: fast-paced and forgettable fluff selling the “there’s good in everyone” theme to tiny twerps. Harmless.

The 30 million deaf and hearing-impaired people in the United States have developed their own arts culture, complete with actors, musicians and comics, many of whom are considered superstars in the deaf community, though few of them have ever found mainstream success. This doc looks at a handful of these artists and their struggle to break through to a wider audience.

All three films — “The Girl With the Dragon Tattoo,” “… Who Played With Fire” and “… Who Kicked the Hornet’s Nest” — in Swedish with subtitles, in a boxed set along with a bio-doc of author Larsson, interviews with stars Noomi Rapace and Michael Nyqvist, and much more. Our highest recommendation.

THE FRENCH ART OF SEDUCTION

A wonderful collection of sexy French flicks, including “La désenchantée,” with Judith Godrèche, and “Seaside.” The best two, however, are “La vie promise,” with Isabelle Huppert as a weary whore who tries to reconnect with her estranged daughter, and “La petite Lili,” which stars the amazing Ludivine Sagnier and has one of the best opening scenes of any movie ever.