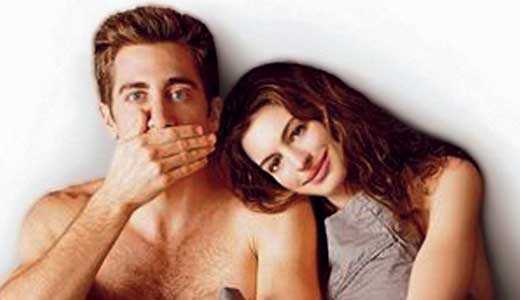 Love and Other Drugs

At first blush, this would seem impossible to turn into a life-affirming feature film: the true story of a guy who gets his arm caught under a boulder and must cut it off to escape. But director Danny Boyle (“Slumdog Millionaire,” “Trainspotting”) fills it so full of flashbacks, fantasy, hallucinations and vidcam arguments — all to a terrific soundtrack — that it’s not claustrophobic or morbid in the least. As everyone knows, this stars James Franco as the laid-back hiker with a pocketknife and a profound love of life. Simply amazing.

Jake Gyllenhaal and Anne Hathaway are simply too good together in this great little film. It’s unfortunate that (spoiler alert!) Hathaway’s character has to die a slow, painful death, yet the movie is, at its heart, a funny, romantic and knowing slice-of-life that you can’t help but love. A nice bit o’ nudity, Hank Azaria, likable leads, Judy Greer, a great script, Oliver Platt, Gabriel Macht, George Segal and Jill Clayburgh — what friggin’ more could you want in a film? Recommended.

Comic Alonzo Bodden won NBC’s “Last Comic Standing” … but don’t hold that against him. This great stand-up concert was filmed in NYC before a packed house as he let fly on everything from pirates to swine flu. And his bit on “real estate in rap music” is priceless. Check it out.

It’s “The Lion King” from the zebra’s point of view when a little baby fawn grows up to see his mom become part of the food chain. It’s also one of the most powerful films in history, animated or not, and a true Walt Disney masterpiece. Show me a kid who doesn’t laugh and cry during this, and we’ll show you a future Mitch McConnell. Now available in a two-disc Blu-ray/DVD combo for a great price.

Christina Aguilera heads for the Sunset Strip to sing and dance at the (no pun intended) titular nightclub owned by Cher. Big noisy dance numbers ensue while Cher emotes on the Meaning of It All. Sleazy? Not sleazy enough! Corny? Does the name Orville Redenbacher ring a bell? Harmless, tacky, PG-13 fun with Stanley Tucci, Kristen Bell and a couple of good songs.

First Blu-ray release of the best spoof on Hollywood ever made. Seymour Cassel stars as the film exec who bets he can make anyone a star — even a schlubby cabbie like Francesco Quinn. But the best thing about this flick is all the great walk-ons and cameos, beginning with Kentuckian Johnny Depp and Louisvillian Rebecca Broussard, and other lesser luminaries like John Malkovich, Benicio Del Toro, James Brolin, Harvey Weinstein, Jim Jarmusch, etc.

Dwayne “The Artist Formerly Known as ‘The Rock’” Johnson gets out of prison and goes back to his day job: hunting down the people who murdered his brother. Hot on his heels are Billy Bob Thornton and Oliver Jackson-Cohen as a cop and a hit man, respectively. The best thing you can say about this star-studded bullet-fest is that we’re spared the spectacle of Da Rock emoting with little kids. Or wearing pink fairy wings.

Shellie Chapman — better known in some circles as video-whore Tori Black — plays an end-of-the-road hooker in his fun, savage, high-concept indie horror outing. She agrees to sit in a hotel room with a schmuck who “just wants to talk to her” … until the full moon rises, of course. Then she’s on the menu! Fangs of fun.

An “urban” (read: “all black”) rom-com starring superhot Tangi Miller and buttoned-down Malik Yoba, whose perfect life swirls down the porcelain when an old girlfriend shows up unexpectedly. A notch above the barrage of similar, if less inspired movies of late; wisely keeping it PG-13.

A surprisingly good indie drama about music, life and the choices we make. Washed-up Vegas act Hamilton von Watts finds himself stranded in a small desert town where former-jazz-legend-turned-auto-mechanic Robert Guillaume gives him some good advice about singing in Melissa Joan Hart’s little bar. May be hard to find, but worth your time.

THROUGH THE WORMHOLE WITH MORGAN FREEMAN

An excellent Discovery Channel series that explores the link between technology, humanity and the deepest mysteries of existence — and all narrated with the dulcet tones of Freeman. A two-disc set of five episodes.