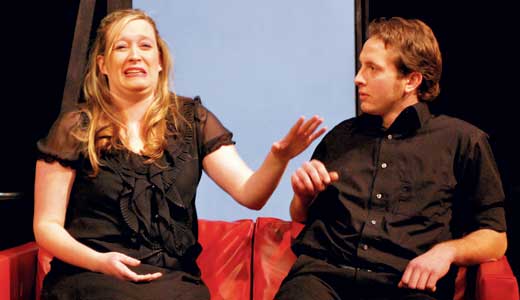 A first date might be compared with a game of Twister. The rules seem simple enough and the game looks harmless, but before long, you’re in a clumsy yoga-like position, sweaty and trembling, possibly with your face in someone’s crotch. It’s either hilarious, excruciatingly painful or both. Introduce alcohol into the game, and the fun/pain reaches a new level. Dating is an art form, relationships are work, and sometimes love just really sucks — as examined, hilariously, in Bunbury Theatre’s latest production of Rich Orloff’s lovey-dovey vaudeville.

This vivacious sketch show takes place on a polka-dotted stage that looks like a huge Twister board; the five actors barrel in and out of colorful doors, performing spoofs on dating, marriage, fantasy, wedding planning, divorce, sex and what happens when a couple just can’t turn each other on anymore. Focusing only on heterosexual couples, the piece argues that there are some things that men and women may never understand about each other, though they never stop trying.

The three women and two men in the cast take turns playing various characters, representing the familiar and not-so-familiar faces of the dating world: the Stepford guy, the crazy bitch, the sex worker, the couple who likes to watch live orgies, and even a pair of lustful vegetarians. Bunbury veteran Susan McNeese Lynch and newcomer Jeff Ketterman carried the show, bouncing off one another expertly. Though she was a bit soft at times, Lynch possesses a graceful kind of humor and looks at home on stage, while Ketterman is solid in his timing and movement and can effortlessly jump from one extreme personality to the next.

Luke Aaron is the less boisterous of the two men, but his characters are lovable nonetheless, especially his rendition of a nervous, awkward date who just wants to impress. He and Karen Faulkner have one scene together in which they utilize silence so beautifully that it becomes one of the most hysterical moments in the show. Faulkner and Jennifer Ariel are consistently funny, but they seemed to be holding back a bit, most likely due to an overall lack of energy onstage.

Don’t get me wrong — the show isn’t dull. I laughed a lot, and so did everyone else in the mostly packed house. It was strange — it was like a Saturday-night-special kind of show, but it seemed to be rolling along at a Sunday afternoon pace (which is when I saw it). I don’t know if the cast was just sleepy, but I expected the show to be rowdier, yet some potentially hilarious moments got dragged along instead of fully played up. This script allows for all sorts of comedy, but it seemed the actors were too afraid of going over the top. Ketterman was able to knock down that wall a couple of times when playing a caveman and a one-liner spitting wedding/funeral planner who resembles Groucho Marx. But the performance was tame, even with the delightful dirty words.

“Romantic Fools” is a good date show, but it doesn’t have to be. Those who might be cynical about the L word but still appreciate the humor that comes with it would likely enjoy this refreshing and witty take on romance … and the fools who get involved.